New York City’s commercial real estate market is headed for its strongest year since before the 2008 financial crisis, thanks in part to foreign buyers who have been snapping up office properties and driving up prices.

Bank of China, the state-owned giant that’s one of the world’s most-powerful companies, has been helping keep that market afloat, loan data shows. As US banks reduced their average loan size and exposure to the market after the 2008 financial crisis, Bank of China stepped in. The Chinese group lent increasingly more money until this year, when lending abruptly slowed down, according to data from CrediFi, which tracks commercial real estate lending in the US. 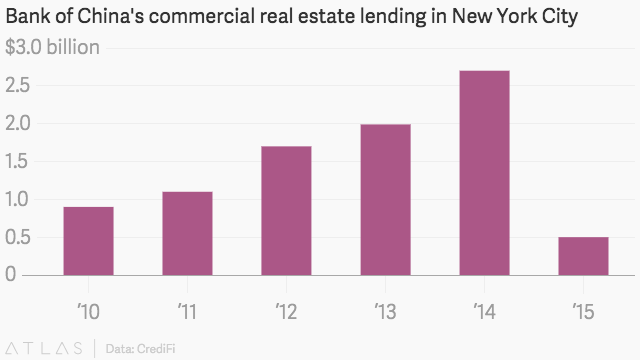 Mapping big Chinese banks’ involvement in local real estate markets around the world is particularly important these days. As China’s economy slows, its big banks are feeling the strain as delinquent loans increase. State banks like Bank of China have also been called on to fuel China’s stock market stimulus. “We definitely expect that if Bank of China is impacted [by the market downturn] it will have less capital to work with, and will put out fewer loans” to commercial real estate properties in New York, Ely Razin, CrediFi’s CEO, told Quartz.

How heavily New York’s commercial real estate prices might be affected by the Chinese downturn is hard to tell. Bank of China’s share of the city’s total commercial real estate loans was less than 5% in recent years, CrediFi calculates, so any pullback, if it happens, won’t be cataclysmic to city office prices. But the impact, however marginal, will be replicated in cities across the US, and around the world.

Bank of China has been the most aggressive of any big Chinese bank at expanding overseas, Moody’s Credit Services noted in a recent report, making more loans outside of China than any other big Chinese bank. It’s part of an expansion plan that the bank embarked on years ago, to mirror the “opening up” of China’s financial markets. Bank of China is “seizing opportunities arising from China’s ‘going Global’ strategy,” as the bank’s 2012 annual report explains. 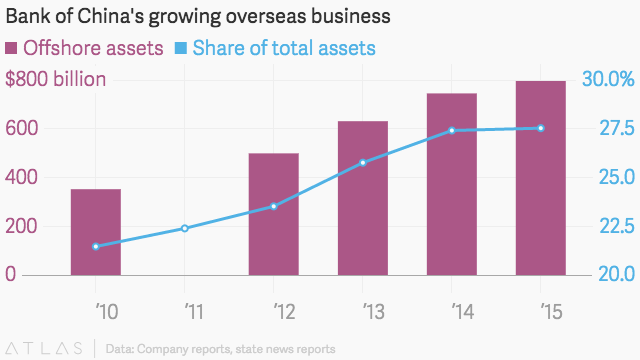 Moody’s expects Bank of China’s overseas assets to reach 40% of overall assets by 2018, and the rating agency reckons its capable of managing the turmoil it may face abroad. The bank’s “experience is long established, and it has successfully carved out niche segments overseas,” allowing it to eliminate “downside risks,” Moody’s said. Given the questions looming about China’s economy, Bank of China’s more dangerous problems may be at home.