Ian Rogers, a senior Apple executive who led the development of Apple’s Beats1 radio service and guided Apple’s online radio strategy, surprised everyone last week with news that he was leaving the company. At the time it was only known that he was moving to Europe to work in an unrelated industry. It’s now confirmed that he left Apple to take on the role of chief digital officer at LVMH, the luxury fashion group that owns brands such as Louis Vuitton, Céline, Dior, and Givenchy.

It’s one of the surest signs to date that LVMH, and luxury more broadly, is getting more serious about embracing digital. With a few exceptions—Burberry long ago jumped feet first into digital—luxury labels have been slow to go online, concerned that the sensory experience of their finely crafted, high-end wares would be diminished when digitized and shrunken to a two-dimensional, pixellated thumbnail. “Fashion is about clothing, and clothing you need to see, to feel, to understand,” Bruno Pavlovksy, president of fashion at Chanel, told Bloomberg.

Customers, however, are doing more of their shopping online, and luxury brands stand to miss out if they don’t pay attention.

A report by McKinsey (pdf) found that, while overall sales of luxury goods increased just 2% in 2013, online luxury sales jumped 20%. The consulting firm projects that online sales ”will more than double to approximately €20 billion [$22.5 billion] in the next five years.”

A separate McKinsey report from earlier this year noted that “nearly half of luxury goods buying decisions are already influenced by what consumers hear or see online.” By 2018, it projected, global online sales of women’s luxury fashion will jump from 3% of the total market to 17%, totaling $12 billion. 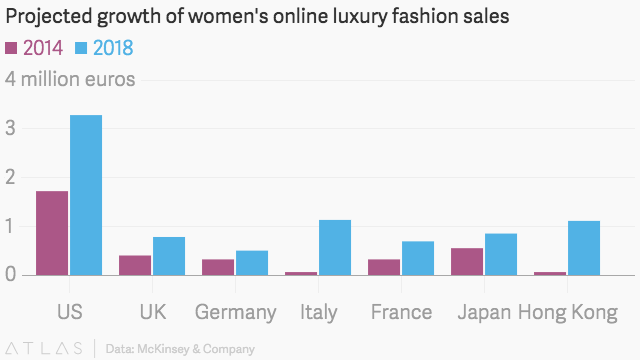 Rogers has worked his whole career in digital music. By securing the top music job at Apple, he seemed to have reached the pinnacle of the industry. His new task will be to help LVMH’s brands develop their e-commerce channels.

“I asked my wife the night of the Apple Music announcement: Was that the starting gun or the finish line for me in the digital music race?” Rogers told the New York Times on Sept 1. “I decided I’m ready for a new challenge both professionally and personally. I have more to learn and contribute.”

That LVMH tapped him shows the size and importance of that challenge. If other luxury brands don’t want to fall behind online, they’re going to have to start putting more muscle into digital as well.