Tesla CEO Elon Musk tweeted Sept. 2 that the company’s next electric car, the Model 3, will start production in two years. This came soon after the newest Tesla Model S broke Consumer Reports’ rating system with the best score ever. But even with electric and hybrid cars like Tesla’s and Audi‘s constantly grabbing headlines, it seems that Americans haven’t really changed their car-buying habits. Data from the University of Michigan show that the fuel efficiency of cars purchased in the US has remained relatively flat for eight years. 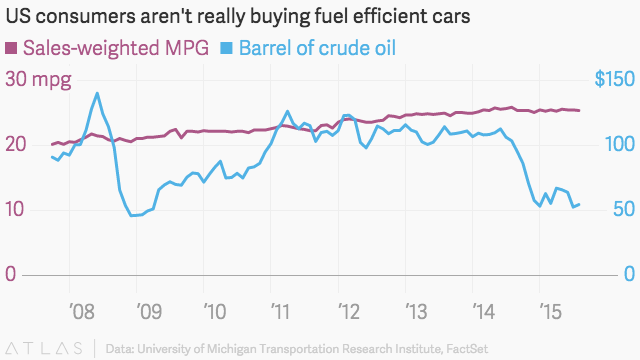 The average fuel efficiency of cars bought in the US since October 2007 has risen from about 20 miles per gallon (mpg) to a little over 25 mpg—roughly 25%—according to Michigan’s Transportation Research Institute. Over that same period, the price of crude oil has varied wildly, but seems to have had little effect on the types of cars that Americans are buying.

It could well be the case that Americans interested in fuel efficient cars have over the years kept buying greener Priuses and Teslas, whereas Americans who are just interested in going fast in straight lines have continued to buy less fuel efficient cars. But Michigan’s report looks at all SUVs, pickup trucks, vans, and cars sold each month, and it seems utility vehicles continue to be the most popular choices for Americans, regardless of fuel efficiency. The best-selling car in the US in 2014 was the Toyota Camry, which has an average mpg of 28. But the three best-selling vehicles in the US last year were all trucks—the Camry came in fourth—and all have lower fuel efficiency ratings than the average sedan.

Whereas its most recent car, the Model X costs around $132,000, Tesla’s Model 3 is expected to cost around $35,000, which is a lot closer to the cost of the average Camry, although still expensive. Teslas are selling out as fast as the company can produce them, and other high-end electric cars are finding similar success. But even with the Toyota Prius continuing to sell quite well, it seems that until more exciting car brands are able to bring down the cost of their electric and hybrid models, fuel efficiency will continue to remain in the back of consumers’ minds.