Over four million Syrian refugees are living outside their home country, displaced by a civil war that broke out in 2011, but the photograph of Aylan Kurdi, 3, and Galip, 5, whose dead bodies were found on a Turkish beach this week, are changing the way the world views the refugee crisis.

Abdullah, the father of the two boys and a Syrian-Kurdish barber, described how he lost his sons, and his wife, in a series of emotional interviews over the past 24 hours.

“My two sons and my wife died,” he said in an interview with Radio Rozana, a Paris-based radio station established by Syrian journalists. (Quartz has included a full translation of this interview below.) His family drowned during a four-kilometer mile boat journey that was only supposed to take 30 minutes.

The family lived in Damascus before the war began. They fled from there to Aleppo, and then to the city of Kobani, a Kurdish stronghold in northern Syria that has been decimated by fighting between Kurds and the Islamic State or Iraq and the Levant (ISIL). The Kurdi family finally crossed into Turkey late last year, according to Canada’s Globe and Mail. He could not support his family in Turkey, he said.

Abdullah said the family payed 4,000 euros (about $4,500) for four seats in what they thought would be a motor boat, but turned out to be a rubber raft.

“Of course we were afraid of drowning,” he told The New York Times, “but the Turkish smuggler said it was going to be a yacht.” They departed at 3 a.m. from the Bodrum peninsula, on the western coast, bound for the Greek island of Kos, despite high winds and waves.

Soon the trip became incredibly rough. “When we were away from the Turkish coast, we were faced with high waves,” he told Radio Rozana. ”Suddenly, the Turkish smuggler jumped off the boat and ran away. After that, a huge wave hit the boat and flipped it over.”

“I held my wife and two kids tight and grabbed the edge of the boat for about an hour,” he continued, “and my sons were still alive until that point. The first died, so I left him to save the other, but white foam started coming out of his mouth and he died also. So I left him to save my wife, but she was already dead,” he continued in his interview with Radio Rozana.

When asked if he and his family were wearing life jackets, Kurdi said they they were, but that they “were all fake.”

Tragedies like the Kurdi family’s are only becoming more common as refugees flood out of Syria. The total number registered with the UN has only continued to rise since the civil war began, passing the 4-million-mark in July: 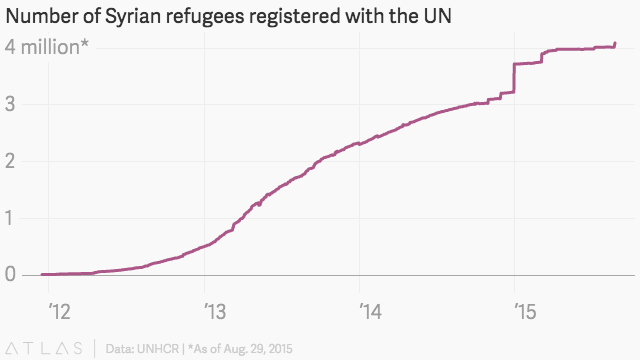 The family’s horrible tale has galvanized some governments into action. Leaders from the United Kingdom and Canada—the Kurdis’ reported final destination—have in the past 24 hours agreed to take additional Syrian refugees, and politicians worldwide are rethinking their policies on Syrian refugees.

Oil-rich Arab states, however, have not agreed to take any refugees.

Abdullah (A): My two sons and my wife died.

Radio Rozana (RR): What time did this happen?

RR: You went with a Turkish smuggler, yeah?

A: One of them is Syrian and the other is Turkish.

RR: One Syrian and one Turkish?

A: Yes, they took us to a place that is one-hour away from where I live.

RR: Abu Ghalib, what made you leave Syria? Is it the difficult circumstances or you just wanted a better life for your sons?

A: You know how it’s like in Syria at the moment. ISIL is destroying Syria. We came to the Turkish government for help, but to no avail. I went through a lot. I was trying to work hard for me and my family, and my sister is also trying to help provide us a residence in Istanbul. I was hardly surviving, how will I also provide for my wife and kids? Only then did I decide to leave, with financial help from my father and sister to secure a place to live, a house or something. The first time I tried to leave, the boat engine broke down. On the second, third, and fourth attempts, the Turkish coast guard caught us and forced us back. Eventually, we paid a guy 4,000 euros for my wife and I, while they asked for half the amount for my children.

A: Yes, hoping that it would work this time. However, the boat was too small. It was 5 meters long.

RR: Did they tell you that it was a 5-meter fishing boat?

RR: How many of you were on that boat?

RR: And that’s why the boat couldn’t handle it?

A: [noise] … then the smuggler started sailing and it was going well. Once we left the Turkish coast, we were faced with high waves. Suddenly, the Turkish smuggler jumped off the boat and ran away. After that, a huge wave hit the boat and flipped it over.

RR: And you lost awareness of your surroundings? Were you aware of what was happening around you after that?

A: I held my wife and two kids tight and grabbed the edge of the boat for about an hour, and my sons were still alive until that point. The first died so I left him to save the other, but white foam started coming out of his mouth and he died also. So I left him to save my wife, but she was already dead. What else could I do? I stayed in the water for three hours before coast guards finally showed up.

RR: But, weren’t you supposed to be wearing life vests?

A: We were. But they were all fake. They were useless. I just want to say a word to the world. My life is already over, but I’m asking them to have mercy on the Syrian people!

RR: Are you considering trying to flee to Europe again?

A: Never. Never. I was only going there to secure a better life for my family. I worked in Istanbul for long hours for only 50 Liras a day to provide food for my kids. I had to work very hard so that I didn’t have to end up in the streets begging for food. But God has decided to take it all from me. My life is over. However, I am asking the world to have mercy on the Syrian people, because watching what’s happening is nothing compared to going through it. I mean Syrian workers only get 25% of wages in Turkey and are made to feel like it’s a favor by to let them work, do you understand what that means? I don’t want anything from the world, I just wanted them to take action and help. May Allah have mercy on those who died including my children and wife. I will not consider getting married or having children again. My life is over.