The holiday season is quickly approaching, and one of the most sought-after gifts is loved by celebrities and athletes alike, happens to be illegal to use in some countries—and catches fire on occasion. The hoverboard is everywhere right now, and Quartz has complied a guide to help you understand just what all the fuss is about.

Well, they’re definitely not what the writers of Back to the Future II envisioned for this year. The hoverboards of 2015 don’t actually hover. Possibly, from a great distance, if you can’t see the rider’s feet or you’ve misplaced your glasses, it might look like someone’s hovering along. But in reality, they’re motorized transport devices that have a wheel, or two,  upon which someone stands—like a Segway without the pole and handle bars.

If you search on Amazon for “hoverboard,” you’ll be presented with a range of two-wheeled boards, although Amazon will also will also include results for “hoverboard segway,” “segway,” and “self-balancing scooter,” just to cover all the possible bases. This pretty much sums up how the boards work, too—you stand on one, lean forward or back to speed up and slow down, similar to the way you’d ride a Segway.

But unlike a Segway, the boards tend have a motor connected to each wheel, which lets each foot move individually—allowing for greater control over stability in the absence of a Segway’s pole and handle bars, and to help the rider steer left and right.

Also unlike a Segway, which you’re unlikely to encounter in 2015 unless you’re a mall cop or in a really obnoxious tour group, hoverboards are growing in popularity.

Some useful stats: According to PC Advisor, most hoverboards can accommodate about 220 pounds of weight. They can only hit top speeds of about 10 mph, and generally have a range of about 12 miles. The boards themselves generally weigh over 25 lbs.

Why are hoverboards everywhere right now?

2015 has been the year of the hoverboard. Back in January, CNN named the IO Hawk-branded hoverboard to be one of the coolest pieces of technology at the Consumer Electronics Show in Las Vegas. Since then, multiple companies, either making their own hoverboards, or rebranding Chinese imports, made it their mission to spur on demand for their boards by getting them in the hands of celebrities and influential individuals across the world.

They’ve graced the stage of award shows, featured on late night talk shows, and turned up on seemingly every single Vine account. BuzzFeed has waxed lyrical about the craze all year, and even Walmart has moved to have boards in stock for the holiday rush. 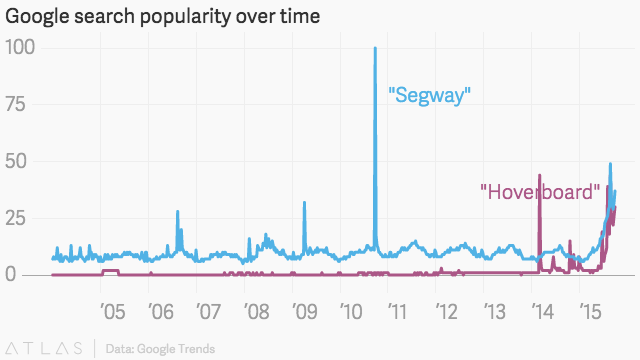 YouTube star Casey Neistat was an early exponent, with his initial review of a “Hands free Segway thing” in July garnering over 4.3 million views.

Hoverboards are not just a US fad, either. A pilgrim was seen using a hoverboard to complete the tawaf—a circumnavigating of the holiest site in Islam, performed at Mecca as part of the Hajj—and the UK government recently outlawed their use on British streets.

In August, rapper Wiz Khalifa helped bring hoverboards to the general US consciousness when The New York Times reported that he was arrested for refusing to get off one at Los Angeles International Airport. Khalifa later joked about the incident on Twitter, suggesting that the cops that arrested him would themselves soon be riding them as well.

They’re truly a global phenomenon. They’ve been used, according to Fusion, to dance to Justin Beiber songs:

And even Armenian weddings:

This is about as easy to answer as why we’re calling them hoverboards. There are myriad Chinese manufacturers that seem to be selling boards based on one or two designs. Alibaba has one for only a few hundred dollars, but without much information on who’s making them or where they’re coming from.

There is currently, however, a patent war taking place over who actually owns the concept of a two-wheeled self-stabiling vehicle. Mark Cuban, billionaire entrepreneur, owner of the Dallas Mavericks, and Shark Tank adjudicator, has invested in a product produced by American inventor, Shane Chen. Chen created the Hovertrax, for which he was awarded a patent in 2014. Cuban has vowed to sue any company that appears to be copying Chen’s invention, which is on sale for $1,495.

One of the target’s of Cuban’s ire has been IO Hawk, whose hoverboard costs $1,800 and which, Cuban claimed on Twitter, has infringed on Chen’s copyright. He’s since taken down his inflammatory tweets toward IO Hawk, but left up this retweet:

In equally petty form, IO Hawk currently has this inscription on the top of its website: “”IMITATION IS THE GREATEST FORM OF FLATTERY”#TRUTH”

On top of all this, Segway, the inventor of the original dorky self-balancing mode of transport, is actually suing Chen. Earlier this year, Segway was bought by a Chinese firm called Ninebot, that used to make knock-off Segways, and was, amazingly, sued by Chen for knocking off another personal transport product he invented, the Solowheel.

Cuban has also implied that he could sue Walmart, as the company plans to stock IO Hawk hoverboards in time for the holiday shopping season, saying: “They are in for a nightmare.” Needless to say, it’s a bit of a mess. Both Chen and IO Hawk were not immediately available for comment.

Beyond this patent feud, there are countless other knock-off or similar hoverboard models, all with equally bizarre names. Here are some of the bigger ones:

Jamie Foxx is a big fan, as are countless athletes—including the JR Smith from the Cleveland Cavaliers, Karim Benzema of Real Madrid—and Justin Bieber.

The company’s marketing has involved getting the boards in the hands–or at the feet—of as many celebrities’ hands as possible. BuzzFeed reported that Cuban has also negotiated with PhunkeeDuck since he partnered with Chen. PhunkeeDuck’s hoverboard costs $1,500, and also looks a lot like Chen’s and IO Hawk’s designs. PhunkeeDuck wasn’t immediately available for comment.

These boards look a lot like the IO Hawk boards, even down to the logo. But on Chic’s website, there’s a prominent disclaimer to say that the company has a range of Chinese patents that no other company can exploit. Chic’s boards can be bought through Alibaba, or from other online stores, for about $500.

This Chinese company started out making knock-offs of the original Segway scooters, but has since bought Segway, and raised over $80 million from Xiaomi and Sequoia Capital. Ninebot has since released a new generation of Segway-style devices with Xiaomi, called the Ninebot Mini. The design is somewhere between the original Segway and the new hoverboard style, and costs $315. The weird knee rests probably mean the Mini won’t be used in quite as many Vine dance videos as other hoverboards, but it does look a bit more practical for longer trips.

There seems to be a new variation on the same basic concept every day, each with its own bizarre name. There’s Uuboard from Canada, Hoverboard Technologies—which is more like a skateboard with a motorized wheel in the middle—and Swagway, which is obviously like a Segway, but with, er, more swag.

Should you buy one?

Some boards are pretty reasonably priced, but there’s also a chance that those are the ones more likely to have explosion issues. The hoverboard could end up filling the gap between long-distance modes of transport and walking short distances—like the iPad of personal transport. Or they could end up being the Minidisc of transport, solving a problem that no one really had, but seemed really cool for a while.

Bottomline: if you want to travel short distances quite slowly, looking pretty cool while you’re doing it, but with the prospect of having to lug your transport home when it runs out of power—then go for it.