Apple is holding one of its trademark product keynote events today (Sept. 9) in San Francisco.

A year ago at this time, celebrities were flying in to see the company unveil the Apple Watch for the first time. Today’s event seems less hyped, but could still be interesting.

Here’s what to expect.

iPhone 6S and 6S Plus

It is September, so if the pattern holds, Apple will use today’s event to unveil its latest iPhone models. It is an “S” year, so expect the phone to largely look the same as last year’s iPhone 6 and 6 Plus models, with souped-up features.

If Apple’s timing is the same as last year, the new iPhone should ship next Friday, Sept. 18, with pre-orders beginning Sept. 11.

Apple will likely re-demo new software features set to launch on iPhones, iPads, and the Apple Watch, which were unveiled at its Worldwide Developers Conference in June.

These include picture-in-picture video, new split-screen app modes, transit information in Maps, and a new News app. On the Apple Watch, this includes new, fully featured apps, which can access the watch’s sensors and microphone, and new watch-face “complications.” Plugged-in Mark Gurman of 9to5Mac also reports that Apple will show off new watch bands at the event and a gold-colored Apple Watch Sport model.

If patterns hold, iOS 9 could launch next Wednesday, Sept. 16, with rapid expected uptake. One of its handy features is that it will require less free device space to upgrade, which could improve its adoption rate. 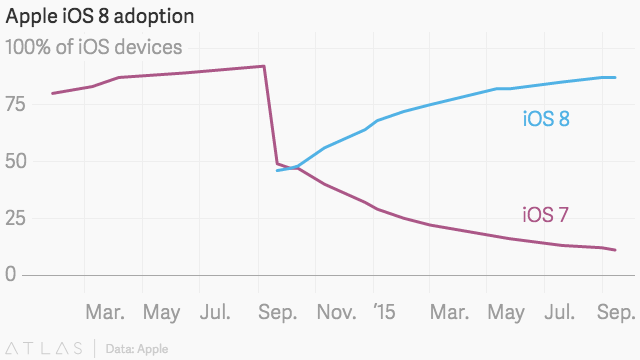 This could be the most interesting and exciting portion of the event.

Apple will reportedly reveal a new Apple TV streaming media box, which includes support for Siri voice commands, third-party apps, and games. Apple has gradually improved its “hobby” set-top box since releasing it in 2007, but progress has recently slowed.

Other devices, such as the Roku streaming gadgets, have long supported third-party apps and games, but they haven’t truly taken off. Still, the combination of Apple’s hardware and software capabilities, App Store experience, and marketing know-how makes this a potentially vibrant new platform.

This is truly a question mark.

Mark Gurman reports that Apple will also unveil its long-awaited, big-screen iPad Pro at today’s event. Writing a month ago, BuzzFeed’s John Paczkowski reported the iPad Pro would be a “wildcard” at the September event. Meanwhile, well-informed Apple observer John Gruber hypothesizes that it’s more likely Apple would unveil the giant iPad at a separate event in October, for timing and focus reasons. (Apple has announced its iPad updates in separate, October events the past two years, when it also showed off the latest OS X features for the Mac.)