Yahoo shares are tumbling on the news that a tax-free spinoff of the company’s Alibaba holdings might not work out as planned—the stock is now down some 40% since the beginning of the year. Many investors are no doubt upset. Some may even be losing patience with CEO Marissa Mayer. But probably few would dare to say what New York University marketing professor Scott Galloway said about Mayer in an interview today (Sept. 9) on Bloomberg Surveillance.

“In my view, and this is going to fill up my inbox this morning, if she hadn’t announced she was pregnant with twins, she’d be out of a job within six months,” Galloway told host Tom Keene, referring to Mayer’s recent announcement that she’s expecting identical twin girls.

“I don’t think any board in America right now in technology that’s as visible as Yahoo wants to be seen as not leaning in,” Galloway added. “I think she got a reprieve from death row because she’s pregnant with twins. I realize how awful that sounds but she’s going to go down as the most overpaid CEO in history.”

Mayer’s compensation was $42,083,508 last year, making her the 14th-highest-paid CEO among heads of large-cap US companies.

Galloway said Mayer has made ”some of the worst acquisitions in the history of tech” (he doesn’t specify which) and criticized some of her costly, failed senior level hires. He didn’t spare the company’s board, either, calling it a “lesson in poor corporate governance,” and he suggested the company should just sell itself to Microsoft.

“We should put a bullet in this story called Yahoo, it is time to euthanize this thing,” Galloway said.

There’s plenty to quibble with about Mayer’s performance. Indeed, performance at the company has been inconsistent as she works to change it: 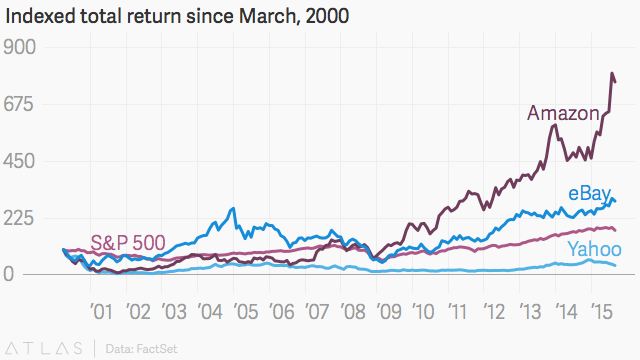 But the lagging performance isn’t unique to Mayer’s tenure; in fact, Yahoo generally has been doing better than it had been before she joined as CEO three years ago and started shifting what was a declining display-ad business into areas with better revenue prospects.

Mayer was hired to turn around a company that has been struggling for more than a decade, and she has articulated a strategy with potential.

Whether that potential has been overvalued in the market is a fair question—one that can only be answered with the benefit of hindsight. In the meanwhile, to say so definitively that Mayer has preserved her job thanks only to her pregnancy feels more than a little audacious, not only because the statement implies a certain amount of sexism, but because it’s cherry-picking the evidence of Mayer’s impact on Yahoo.