As the world is starting to realize, the civil war in Syria is not contained within Syria’s borders. There’s not only the enormous refugee crisis, which has sent millions fleeing the violence, but also the fact that Syria exists as part of a global economy. Despite the chaos and violence, commodities still flow out of the country, and can end up in products elsewhere.

One such commodity is cotton—one of Syria’s top ten exports—much of which is now in the hands of ISIL militants. The amount of cotton at issue is relatively small, in part because production has shrunken substantially as the four-year conflict has hurt farmers and turned farmland into war zones. But as Agence France-Press (AFP) reported, ISIL has spread to many areas where cotton is grown, and it’s selling the crop to Turkey in order to help finance itself. 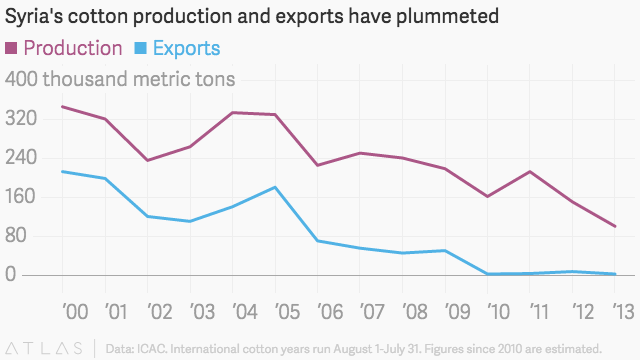 Foreign governments and companies are concerned that even if the amount of cotton at issue is fairly minute, some of this crop could end up in the supply chains of international clothing labels.

Jean-Charles Brisard, an expert on terrorism and its financing, says that ISIL now controls almost 90% of the cotton-growing land in Syria, and there may be more leaving the country than international organizations are aware of. “[ISIL] sells the production through intermediaries and buyers exporting to Turkey,” he tells Quartz. He estimates that through the ”commission” it takes from growers and the taxes it levies, the terrorist group claims about 50% of each transaction.

That cotton isn’t included in the official export tally reported by the International Cotton Advisory Committee (ICAC) in the chart above, since it’s moving through back channels. Brisard cited sources saying that exports amount to 10,000 tons per year to Turkey.

The risk of that cotton ending up in the supply chain of an international label is slim. First of all, it’s an extremely small amount, and it would be restricted to brands that source a lot of their cotton from Turkey. The luxury group Kering, for instance, which owns brands such as Gucci and Saint Laurent, told AFP it’s not worried because only a tiny portion of its cotton comes from Turkey.

But some fashion houses are apparently concerned enough that they’re paying closer attention to their supply chains for cotton.

“Our regular supplier sent us bolts of cloth without a tag of origin, and we asked our workshops not to touch them until we had all the required certificates,” a buyer for haute couture collections at a “top label” told AFP. ”Can you imagine? Cotton supplied by Daesh,” she said, using the Arabic acronym for ISIL.

Turkey has refused to accept suspect Syrian cotton, AFP reports, probably under pressure from the US. (Quartz has reached out to the US Department of Commerce for comment and will update this post with any response.)

But the situation points to an underlying problem: how difficult it is for fashion companies—and really any global company—to maintain a completely transparent supply chain.

Raw cotton may change hands multiple times before it even arrives at the doorstep of the clothing label that will turn it into a garment. As it’s taken from a farm and transformed into a usable textile, it can move through brokers, spinners, dyers, and merchants—many of them more concerned about the fiber’s price than its provenance. Information is easily lost, and a fashion brand may have no inkling that there’s anything troublesome about the origins of the bolt of cotton it buys for its shirts.