Multi-million-dollar heists, price fixing, and asset seizures are just a part of doing business. That’s because about 75% of the world’s maple syrup comes from Quebec, Canada—and is governed by the Federation of Quebec Maple Syrup, an organization the New York Times described (paywall) in August as “effectively a cartel.”

But this could be the year for Americans to stand up for a free maple syrup market.

As the Times explained, the federation has been Canada’s only wholesaler of the liquid gold since 1990. It is supposed to do for maple syrup, a volatile commodity, what OPEC does for oil. In high production years, it stores the surplus syrup to sell in low production years. But since 2004, its control has expanded. Under the current system, the federation dictates not only who can make the syrup, but also how much they can sell and at what price.

The federation operated mostly under the radar until the summer of 2012 when $18 million of maple syrup was stolen from the organization’s Global Strategic Maple Syrup Reserve, in what became known as The Great Canadian Maple Syrup Heist. The thieves were eventually apprehended, but interest in the federation itself hasn’t gone away.

Canadian maple syrup producers attempting to work outside that system, both NPR and the Times noted, do so at their own risk: the federation will place guards on suspected farms, fine guilty parties, and even seize the sugary contraband. Unhappy with the federation’s tactics, NPR reported, some Canadians are even hopping over the border to do their work in the US.

For its part, a spokesperson for the federation told NPR that it has a 75% approval rating amongst its members and operates through voting, making it more of a democracy than a cartel. Quartz has contacted the federation for comment and will update this article with any response.

Sylvain Charlebois, an economics professor at Ontario’s University of Guelph Food Institute, told Quartz that he agreed that many producers approve of the federation’s strong-arm tactics:  ”It’s not an unpopular strategy,” he says.

But that doesn’t mean it’s a good—or sustainable—one. “At the macro-level, I’m just not convinced they’re seeing a larger picture,” Charlebois said. With high supply levels, including the tens of millions of gallons in reserves, the organization should be working to develop overseas demand, he argues.

When it was first formed, it made sense for the federation to set prices for the commodity: “They wanted to make sure that maple syrup producers actually received a fair price for their product year-to-year.” But now, by inflating the price and making this such a lucrative business, he says, the federation is inviting in competition from producers in other regions, mainly Ontario and the US.

US producers are definitely getting in on the sweet action. US maple syrup output has grown 163% in the past 18 years, from approximately 1.3 million gallons (4.9 million liters) in 1997 to 3.4 million in 2015. Despite a shorter-than-usual sugaring season caused by low temperatures—26 days during the harvest at the beginning of this year, compared with 29 in 2014—production levels were up in 2015. 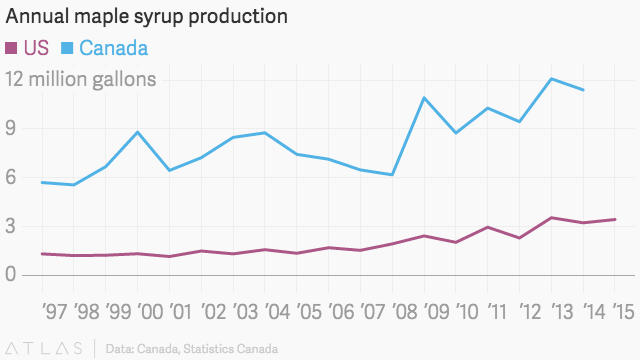 The raw numbers make it seem a long way off, but the sap is definitely starting to flow in America’s direction. “The US. still has a long way to go before matching Quebec’s output, but they are steadily catching up,” Charlebois wrote in the Montreal Gazette in April. The federation has taken notice, too. An official told Canada’s Globe and Mail that month that when it comes to keeping its dominance, “Everything is on the table.”

The federation has no official say in the American maple syrup industry, which operates as a free market but benefits from the high prices set in Canada. In the US, “the price has been stable and at a rate that allows for profit,” Matthew Gordon, executive director of the Vermont Maple Sugar Makers’ Association, told Quartz. ”The downside, right now, is that with the US dollar gaining strength relative to the Canadian dollar, wholesale prices in the US are slumping from where they were in the past five or six years.”

Still, it’s a good place to be in the maple syrup business. “In the US,” said Michael Bryant of Hilltop Boilers Maple Syrup in Maine, “nothing is holding producers back from growth.”

It’s unclear though whether the lower wholesale prices will translate into savings for American consumers. “We haven’t seen much change in retail price of syrup, locally or nationally,” said Gordon. Shipping costs are also on the rise, noted Bryant, making it hard to predict how the sticker price on syrup will change.

But even without a price break, Americans looking to support the cause of freedom likely won’t find a sweeter way.