Walmart has managed to do something very few retailers have accomplished: Convince millions of people its mobile app is useful enough to snag a prime spot on their phones’ home screen.

That precious real estate has proven elusive to retailers whose customers shop at dozens of stores but have only downloaded a handful of apps, preferring to reserve that coveted space for apps like Facebook and Google Maps and turn to retailer’s mobile websites when they want to shop.

To change that, Walmart figured out how to tap into its shoppers’ offline habits to drive more engagement online, Andrew Lipsman, vice president of marketing and insights at comScore, tells Quartz.

With 22 million users as of June 2015, Walmart’s app is now the most popular among retailers after e-commerce heavyweights Amazon and eBay, according to an upcoming report from comScore. And at more than 400% year-over-year growth, it’s on pace to surpass eBay. 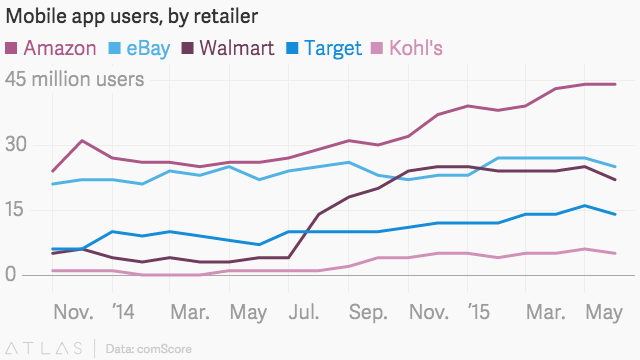 Walmart’s August 2014 spike to 14 million users from 4 million the month before came with the launch of Savings Catcher—a comparison tool that scans customer receipts and compares Walmart’s prices to competitor offers.

Unlike other retailers, Walmart eschews one-time sales in favor of an everyday-low-price strategy. With the app’s price comparison tool, if a competitor’s price is lower than what shoppers paid at Walmart, customers get an eGift card for the difference.

“Customers would come to the stores with the 15 flyers they look through every week to find the best prices on toilet paper,” Helen Vaid, vice president of customer experience at Walmart.com, tells Quartz. “We thought, what if Walmart could take away that need to scour the market every time you walked into a store?”

The result is a few pennies here and there, but the psychological benefit is huge. Now, instead of checking other retailer’s prices every week, shoppers get in the habit of visiting the Walmart app after each trip to see how much money they saved.

The retailer is using that mindset to design other features. For example, it’s testing one that allows customers to push a button in the app to alert Walmart employees when they enter a store’s parking lot to pick up an online purchase. This gives employees a head start on getting an order ready by the time the customer arrives. 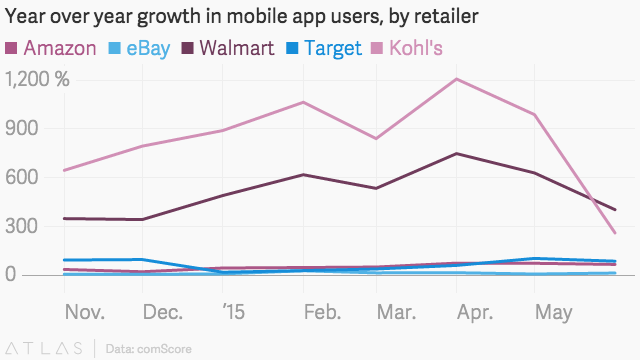 Still, the runaway growth is already slowing. Users actually declined on a month over month basis between May and June. Retailers will have to keep improving their apps in order to keep earning a spot on shoppers’ phones.

Kohl’s first version of its app was designed solely around shopping and failed to draw in droves of shoppers.

When Kohl’s redesigned its app last year it focused on making the app habit-forming by designing it around what drives many Kohl’s shoppers into the store in the first place: coupons.

The new version includes a wallet that stores all three types of coupons its heavy shoppers are known to hoard: Kohl’s cash (rewards earned per purchase), offers that pop up around back-to-school or other sale times, and loyalty points consumers earn for actions like sharing products on Pinterest.

Push notifications now pop up to alert shoppers each time their personalized, short-term offers are about to expire, reminding them to shop before their coupons run out and landing customers back into the Kohl’s app–and in its stores–on a regular basis.

“It’s all about creating a notion of urgency,” Lavu says.