In 1941, three captives of Italy’s fascist regime wrote a utopian manifesto titled Per un’Europa libera e unita (For a free and united Europe). For Altiero Spinelli, Ernesto Rossi and Eugenio Colorni, the only lasting solution to the continent’s bloody war was a federal union of European countries.

That idea, although far-fetched at the time, soon spread. By 1946, Winston Churchill echoed the proposition in a speech at the University of Zurich:

We must build a kind of United States of Europe. In this way only will hundreds of millions of toilers be able to regain the simple joys and hopes which make life worth living.

Eventually, with the Maastricht Treaty in 1991, the dream of a mighty and peaceful European super state—the European Union—was realized.

But the founders left the job half-finished.

Although 28 countries are members of the EU today, with a queue of others eager to join, it is not the federation imagined by its founders. Political integration lags economic integration, which is itself incomplete. The EU is a confused entity, with decisions made and enforced by a tangle of institutions at the national and pan-European levels.

Some complexity is inevitable, of course, trying to coordinate an area with 12 different currencies, 24 official languages, and a mix of open and closed borders. But the current situation doesn’t serve its citizens’ needs, and can’t go on like this.

This year, the EU showed—arguably more than ever before—the dangerous disunity at its heart when facing challenges like Greece’s debt crisis and the influx of migrants across Europe’s borders. States have shown little solidarity when fellow members need help, while EU-level institutions have also come in for criticism for riding roughshod over sovereign wishes. Open borders have been closed, throttling the movement of both people and capital.

Disillusioned, many Europeans are calling for drastic change. Indeed, the government of one of the EU’s biggest and most powerful members, the UK, now wants to formally opt out from the commitment to an “ever-closer union” enshrined in the EU’s founding treaties. And the rise of so-called euroskeptic political parties across the continent has provided momentum for those who would reverse the march of integration in the EU.

Emma Bonino is Italy’s former minister of foreign affairs and a longtime advocate of a stronger European federation. In an email interview with Quartz, she paraphrases Jacques Delors, one of the EU’s founding fathers: “Europe is like a bicycle, you either pedal or you fall.” The problem, she says, is “we stopped pedaling.”

On one hand, member countries—especially those in the euro zone—do not have the full independence to steer their economies without interference. But when they run into trouble, like Greece did (again and again), their counterparts don’t exactly rush to their rescue, and some believe the medicine they recommend is worse than the disease.

And when faced with external pressures, like the burgeoning migration crisis, the EU has shown a similar lack of solidarity. Its institutions struggled to agree to quotas for hosting refugees, sharing the burden across a region with the capacity to absorb the newcomers. Several states, mostly in the East, reject this notion outright.

Such grievances are often directed at the European Commission, the EU’s executive arm. The unelected commissioners in Brussels, although appointed by member states, are often perceived as distant bureaucrats serving the Brussels machine first and the people of Europe second.

And after hostility comes indifference: For many EU citizens, the bloc’s elected legislative body, the European Parliament, is a total irrelevance. Last year, turnout fell to the lowest ever recorded in a European Parliament election—a paltry 42.7%: 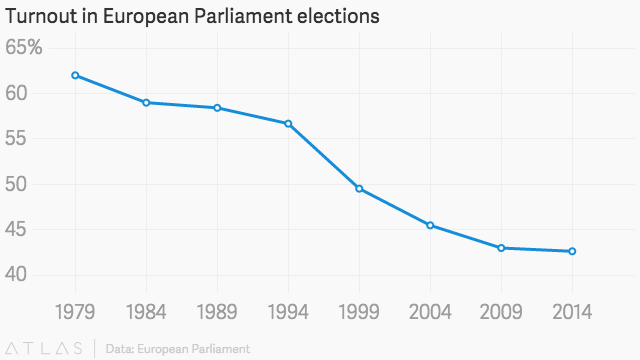 This lack of engagement allows extreme views to thrive at the parliament. The chamber in Brussels is packed with cranks and fringe parties that have a much smaller presence in national parliaments. Ironically, many of these parties, like the Front National in France and UKIP in the UK use the platform of the European Parliament to promote anti-EU platforms—that is, to destroy the EU from the inside.

France’s National Front and the UK Independence Party have the most seats among their country allotments in the European Parliament, but between them control only three seats in their national parliaments. It’s no wonder the ordinary European no longer feels invested in the European project, given who is at the helm of the supposed people’s body in the Brussels.

The prospects for a turnaround aren’t great. ”People don’t want this Europe because it doesn’t grow economically, it doesn’t give future opportunities and is not founded on shareable ideals,” Laura Boldrini, president of the Camera dei Deputati, Italy’s lower house, told Quartz. “If there isn’t growth, employment, and idealism, what is the point?”

In September, in Rome, Boldrini, together with the presidents of other European parliaments—France’s Claude Bartolone, Germany’s Norbert Lammert, Luxembourg’s Mars Di Bartolomeo—signed a declaration calling for an acceleration of European integration.

“We believe that more, not less, Europe is needed to respond to the challenges we face, both internally and externally,” it reads, in part. Greater political integration ”is needed to overcome the inherent weaknesses at the heart of the European Union and of the Economic and Monetary Union, and to provide Europe with the vision it needs to avoid stumbling from one emergency to the other.”

The solution to this crisis of faith, they believe, is for the EU to knit itself together more tightly. In short, to create a true United States of Europe.

According to the officials who signed the declaration, centralized executive power would make addressing the migration crisis easier, with more equal distribution of refugees across Europe, because states would be bound by a single, shared policy. A central government elected directly by European citizens and accountable to popular demands would foster a stronger sense of shared responsibility. And Europe could escape its economic impasse by pooling its debts and uniting fiscal policies across countries.

One common objection to this idea is that strong economies, like Germany, would shoulder a disproportionate burden of sharing its wealth with neighbors. But the status quo is hardly inspiring, and a full-blown EU breakup might hurt countries like Germany even more. More than half of Germany’s exports go to the rest of the EU (the bulk of those to the euro zone); erecting new barriers to trade between partners that currently trade freely thanks to the EU could mean millions of lost customers for all involved.

And if the EU acted as a coherent, unified political entity, its diplomatic status would finally match its economic might. 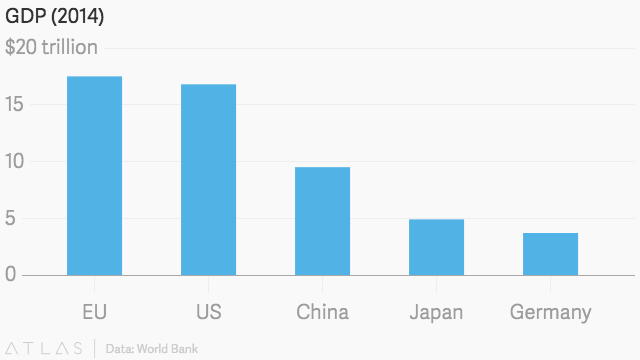 Do you believe in miracles?

Boldrini’s plan has its supporters, and its skeptics.

“It seems a bit of  fantasy,” says Bill Emmott, former editor of The Economist. He recently produced The Great European Disaster Movie, a documentary imagining a what a post-EU Europe would look like. ”There have been plenty of political leaders, including [German chancellor Angela] Merkel, who showed interest in the union, but it hasn’t translated into policy,” he told Quartz.

According to Bonino, the problem is politicians. Locally elected leaders don’t want to risk a nationalistic backlash against the idea of a broad pan-European identity, she says. Not to mention the loss of sovereignty that would come with a federal Europe. As Harvard economist Dani Rodrik notes, “European integration was never something that the people demanded.”

Strangely enough, the prospect of a United States of Europe sounds almost as distant and utopian now as it did back in 1941, when the continent was considerably more fragmented. Back then, it took a war to make the dream of a European Union a reality. Perhaps the pain and panic of this past summer will be what pushes Europe to pedal forward once again.