There are a lot of things the world does better than the US: Literacy, life expectancy, general happiness, and, of course, soccer. You can now add Netflix to that list.

The US and Canada, where Netflix accounts for a whopping 37% of peak web traffic, are both in the middle of the pack when it comes to Netflix speeds. Scandinavian countries dominate the rankings, which shouldn’t be too surprising, as those same countries generally boast some of the fastest internet speeds in the world (pdf). 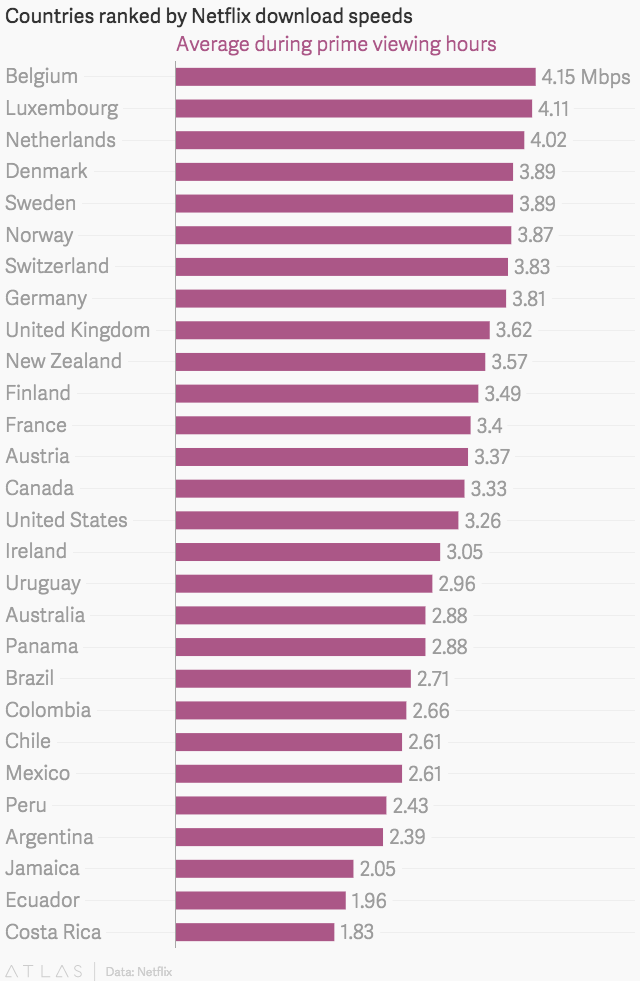 The index measures how well Netflix performs during prime viewing hours. Essentially, the higher the ranking, the better the Netflix viewing experience is in that country. Viewers in countries with higher Mbps (megabits per second) are likely to have reliable connections, minimal buffering, and a clear picture.

Soon, this chart will be much larger. Netflix’s global expansion is relentless: It recently launched in Japan, will launch in Spain, Italy, and Portugal in October, and then in South Korea, Singapore, Hong Kong, and Taiwan early next year. Netflix aims to launch in 200 countries by the end of 2016—a lofty goal, certainly, but the streaming service is well on its way:

In order to reach that goal, Netflix is likely to focus its expansion on two areas of opportunity: Asia and Africa. The company had no official presence in Asia before its Japan launch, and isn’t yet available anywhere in Africa (though South Africa will probably be among the countries getting it soon). Expect Netflix to announce several more targets before the end of the year.