Greeks went to the polls today (Sept. 20) to select a new parliament. It was the second such election this year, and the fifth conducted within the past six years.

It’s fitting, in a way, that the place that gave the world democracy votes so often. But Greek voters are clearly tired of going to the polls—turnout is on track to hit a historic low: 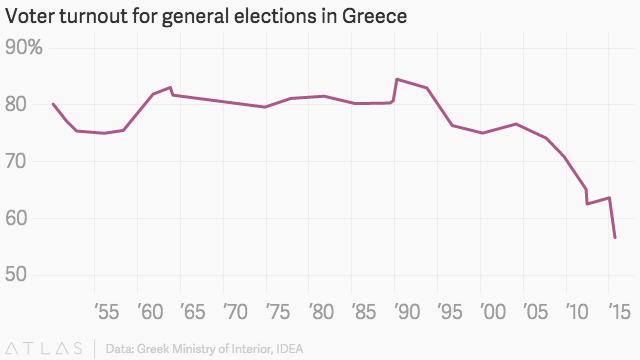 With a majority of votes counted, the leftwing Syriza party of embattled incumbent prime minister Alexis Tsipras is set to remain the country’s largest party. In fact, it seems that Syriza will win a nearly identical share of the vote, around 36%, as it did in January, when it was first propelled to power.

If you count a July referendum on the conditions attached to the country’s latest bailout—which voters comprehensively rejected, per Syriza’s urging—Tsipras has comfortably won the past three nationwide votes, despite almost perpetual political and economic crises. (Like last time, Syriza won’t win enough seats for an outright majority, but will likely form a government via coalition with a smaller party, as before.)

Tsipras hastily called today’s snap poll after a large share of his party defied him in parliament on passing reforms required by the country’s creditors in exchange for fresh bailout funds. Recall that Tsipras initially came to power by railing against a renewed bailout, including by calling the provocative referendum that rejected said rescue. The prime minister signed the bailout deal anyway, subjecting the country to a welter of reforms and conditions demanded by wary international creditors. This kept Greece from getting booted from the euro zone, but didn’t endear Tsipras to a significant part of his base.

And yet, today voters showed that they still back Tsipras over the alternatives. The 41-year-old, supported in January as a firebrand, anti-austerity upstart was today supported as a pro-bailout ally of Brussels. Go figure.

Greece’s economy remains a mess, its financial system is on its knees, and one in four of its people don’t have a job. The low turnout—presaged by small, bitter pre-election rallies—suggests that voters simply want their leaders to get on with it, implementing the bailout that will stave off complete collapse while lobbying for some much-needed debt relief down the line.

Having purged the pesky rebels from his own party, Tsipras may find this government more stable than the last, on the margin. But today’s vote will not do much to put Greece on a clearer path out of economic purgatory, or convince its creditors that they can fully trust the government to implement all of their agreed reforms. Wolfango Piccoli of Teneo Intelligence spelled out this rather bleak reality in a recent note to clients:

The polls will not return the country into the calmer political waters and yield the governance required to successfully implement the bailout and restart the economy. In the best-case scenario another phase of improvisation, hesitation, missed deadlines and much political wrangling will follow the calm of what has been a singularly apathetic election campaign. In the worst-case, Greece will have to return to the polls for a third time this year.