On Sept. 28, Xi Jinping will make his first speech as China’s president to the United Nations General Assembly in New York. Ahead of his talk, China’s foreign ministry helpfully published a list of amendments it would like to see the international body make, “so as to turn the vision of the UN Charter into reality at an early date.”

Some, such as the suggestion that, ”the world needs to come together to make [the UN] a strong champion of peace and security,” allow China to sound authoritative without ruffling any feathers. Others, such as a call to “respect countries’ right to choose their own path of human rights development,” offer a sharper insight into how China wants to reshape the organization to suit its own concerns. All told, the list of 12 “priorities” that China wants the UN focus on show China both assuming the role of a major world power and also trying to shape the world order to better reflect how China does things at home.

Until recently, China’s relationship with the UN was a largely distant one. Since 1971, when it gained a seat and a place at the UN Security Council, it has used only nine security council vetoes, compared with 78 by the US and 24 by the UK in the same period.

Vetoes are an important part of UN decision-making as they allow countries to block the adoption of any resolution labeled as “substantive,” such as the decision to deploy troops on UN peace-keeping missions. Only five countries—the others being Russia and France—have the power to use them.

Six of those nine vetoes have been issued since 2000, suggesting China is becoming a more confident world power. In the past two decades it has also voted for peacekeeping operations, funded some, joined special committees, and contributed personnel to operations in Africa and the Middle East (pdf). 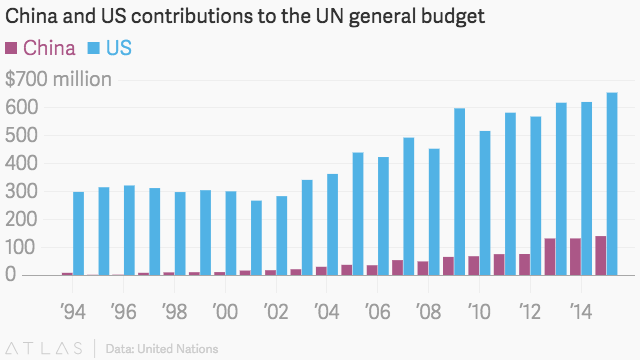 The US, by far the largest contributor in nominal terms, contributed $654.8 million. But if money buys influence, China is on an upward trend: 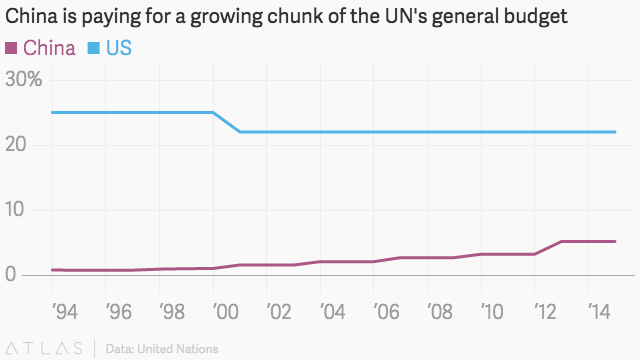 China’s growing interest in influencing global affairs is not limited to old institutions like the UN, and in some respects, it might even be seeking to weaken them. Take, for example, its refusal to acknowledge the Philippines’ call for UN arbitration over a South China Sea dispute. Or its creation of alternative global organizations such as the Shanghai Cooperation Organization, which provides an alternative forum for regional collaboration, and the Asian Infrastructure Development Bank, viewed as a challenger to the World Bank.

Here are a few highlights from China’s proposed amendments that it wants the UN to consider. (The full text in English is here.)

This is not the first time China has tried to shape the UN. In February this year it hosted a debate in which foreign minister Wang Yi suggested the organization needs to better reflect today’s multi-polar world, and that countries should not take unilateral action against others but go through the UN instead. And surprising as it may be to hear China’s leader call for greater democracy, it is not the first time Xi will have used the term on an international stage.

A bigger voice for developing economies isn’t such a bad idea, but calls for more fairness and balance among competing interests are unlikely to win China much sympathy.

After all, the country has ratified but not fully acknowledged the UN’s Convention on the Law of the Sea, which is designed to clarify which countries own which parts of the waters surrounding it. While the US has yet to sign up to the agreement, China has been actively raising tensions concerning sovereignty throughout the South China Sea in recent years, much to the anger of its neighbors. And its domestic approach to democracy and human rights risk making its calls for such ideas on the international stage look rather silly.