Los Angeles, where the homeless were once mostly concentrated in downtown’s infamous Skid Row, is now so inundated with homeless people that tent cities are cropping up all over the city in highly visible places. So overrun are its highways, parks, and underpasses by the sharp uptick in its homeless population—a 12% increase over the last two years alone—that today (Sept. 22) it declared a state of emergency.

The announcement, made by the City Council and mayor Eric Garcetti, included plans to pledge $100 million of the city’s budget toward housing projects and other initiatives to help the homeless. Councilperson Gilbert Cedillo said during a press conference that the problem’s spread throughout the city was interfering with other priorities. ”If we want to be a great city that hosts the Olympics and shows itself off to the world,” he said, “we shouldn’t have 25,000 to 50,000 people sleeping on the streets.”

Garcetti called LA’s homeless population a problem that’s been pushed “from neighborhood to neighborhood” and “bureaucracy to bureaucracy” for far too long. “Every single day we come to work, we see folks lying on this grass, a symbol of our city’s intense crisis,” he said.

LA’s crippling rents and declining wages—coupled with a slow-recovering economy and a tightening housing market—are putting an estimated 13,000 new people out on the streets each month. Earlier this year, a report showed that LA, which has the second-largest homeless population in the country by far, already spends about $100 million a year addressing problems caused by its high rate of homelessness. The area has the highest per-capita rate of homelessness in the US after New York City, partly due to LA’s warm climate. 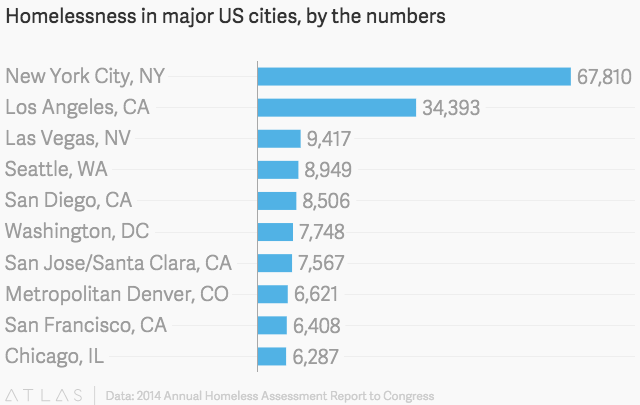 So far, efforts to combat the crisis haven’t helped. For instance, LA’s special housing task force, assembled to tackle homelessness, is only building a fraction of the homes it needs, thanks in part to sky-high real estate prices.

The state of emergency gives the city council more hope of expediting some of its housing plans and other homeless initiatives.