The entire biotech industry took rather negatively to Hillary Clinton’s announcement earlier this week that the presidential candidate would float a plan to combat drug prices—as evidenced by a drop in the biggest biotech index in the country.

But one company in particular saw its shares dive when her actual plan was revealed: 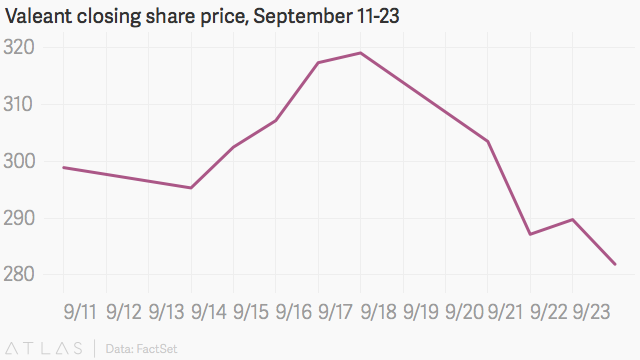 The details of Clinton’s plan explain why Valeant took such a hit. While information on exactly how it would work are scant to this point, one of its centerpieces is to require that pharmaceutical companies spend a certain amount of their revenue on research and development.

Valeant doesn’t do very much R&D.

The company, a favorite investment of hedge funder Bill Ackman’s, has made a great deal of money by buying up other companies and their products, increasing the prices of the drugs (paywall) it acquires, and slashing costs and research and development budgets.

In 2014, Valeant spent just $246 million of its more than $8 billion in sales on R&D. Here’s Valeant’s R&D spending as a percentage of revenue, compared with several more traditional firms: 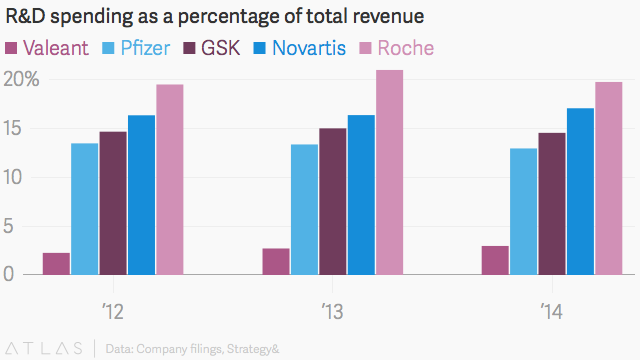 The company argues (pdf) that declining R&D productivity makes its strategy not just logical, but more efficient. And it is true that there has been a steady decline in the number of new drugs that have originated with big pharma, even as most companies have spent more and more money. Many of the biggest wins in recent years have been through acquisition.

But the traditional pharma firms that do much of that acquiring do serve an important function in the process. They specialize in things like medical chemistry—and in the large and extraordinarily expensive clinical trials that actually turn an idea into a government-approved, sellable drug. While it doesn’t have the “Eureka!” moment appeal of finding a new and promising molecule, this function is arguably nearly as important.

Valeant, on the other hand, tends to only buy already marketed drugs, and then use its massive sales force, higher prices, and lower tax rate to benefit. That practice would be significantly curtailed by Clinton’s plan.

There are legitimate arguments against the plan—in particular that this portion wouldn’t do much to actually lower prices, it ignores the extent to which pharma research is specialized, and it could encourage wasteful research spending. But for better or worse, it would require some reassessment for Valeant and other firms following its model.