Chinese president Xi Jinping just delivered his first public address during a visit to Seattle, Washington ahead of his state visit to the White House—and his words were just as positive as you’d expect of any world leader. But as he delivered his speech, bad news about the Chinese economy continued to surface.

“With a high savings rate and huge consumption potential, a hard working population and a rising proportion of middle income people, now we have 300 million middle income earners in China,” said Xi. “China will focus more on improving the quality and efficiency on economic growth, and accelerating the shift of growth model and adjustment in economic structure. It will lay greater emphasis on innovation and consumption driven growth, and in this way will solve the problem of unbalanced, uncoordinated, and unsustainable development.”

Coincidentally, just around the time Xi took the stage, Chinese media outlet Caixin reported that China’s manufacturing PMI, an index that measures growth in the manufacturing sector, dropped to 47.0 for September, the lowest it’s ever been six years. 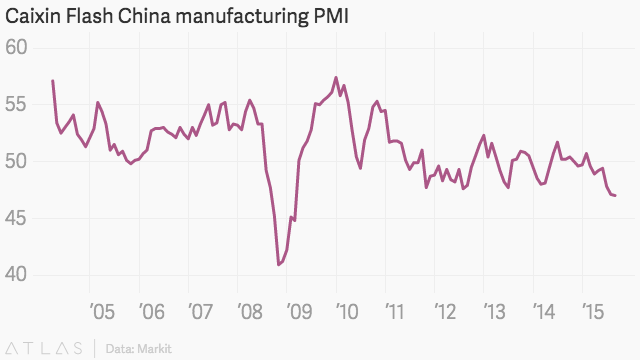 “Recent abnormal ups and downs in China’s stock market caused wide concerns,” Xi said about the market’s downturn and government intervention, but “stocks fluctuated in accordance with inherent laws, and it is the duty of the government to ensure a fair an adjust market order and prevent massive panic from happening.”

Again at about the same time he was speaking, the Shanghai Composite Index took a nosedive upon opening this morning, dropping almost 2% upon opening.

Xi took an unusual turn by proposing the establishment of a “high-level mechanism” with the US to uphold cybersecurity, which remains the core theme of his visit. “Both commercial cybertheft and hacking of government networks are crimes that must be punished with law and relevant international treaties,” he said. “The international community should on the basis of mutual trust and respect, work together to build a peaceful, secure, open, and cooperative cyberspace. China is ready to set up a high-level joint dialogue mechanism with the United States on fighting cybercrimes.”

But there are few signs that these calls for cooperation will lead to much. The US is reportedly mulling economic sanctions against China for allegedly carrying out cyberespionage attacks against the US government and private companies, which could be announced any day now. Officials have also put a damper on expectations of any meaningful agreement being reached.

Tomorrow Xi will remain in Seattle to meet with a consortium of CEOs from China and the US, before traveling to Washington D.C. to meet with the US president.