When news broke that the price of Daraprim, a 62-year-old life-saving drug often prescribed to AIDS patient, had been raised from $13.50 a tablet to $750, outrage ensued. The steep rise was announced on Sept. 20 by Turing Pharmaceuticals, a startup that, according to the New York Times, acquired the rights to the medication in August, and immediately after increased its price by over 5,500%.

Turing’s CEO, former hedge fund manger Martin Shkreli, publicly defended his decision to raise the drug price saying that the new profit would be invested in further research and the drug’s new cost was more in line with that of other life-saving drugs. But he eventually gave in and announced a price revision.

While insults of all kinds have been thrown at “Pharma Bro,” he is not the real villain but rather someone trying to do his job, which is to make a profit. The villain is the system.

A privately funded healthcare system, as the one at work in the US, sets all the conditions that allow Shkreli’s actions. What’s more, they seem perfectly justifiable if viewed from the perspective of entrepreneurship. Health is arguably the most valuable of goods, and if you let the market determine its price without regulation, well, suppliers will always try and get the highest price they can.

Americans pay far more than any other country for prescription drugs. In fact, Americans overpay for every aspect of healthcare: procedures and services are the most expensive in the world, because efficiency plays no role in rewarding the healthcare providers. As Dr. Stephen Ondra—who works as chief medical officer for customer-owned health insurance company Health Care Service Corporation—told Quartz, “right now inefficiency is rewarded, the more you do to get an outcome, the more you make.”

There is a common denominator behind all of this: the free, unregulated market.

The US is an outlier among industrialized nation: it’s the only rich country that does not offer a publicly funded health system, relying instead largely on private insurance. This affects the pricing of drugs in several ways that are independent from the actual regulations imposed on pharmaceutical companies.

First, and perhaps most importantly, the power in setting the price for drugs is skewed toward drug manufacturers. Unlike countries where universal health coverage is in place, the negotiating is left to individual care providers rather than being in the hand of a large, publicly funded buyer that’s able to negotiate since it purchases most (if not all) of the drugs.

For those with health insurance, high drug prices result in higher premiums, but it’s hard to notice the price increases directly. This means consumers lack awareness of the actual medication prices, and consequently, any pressure to keep them under control.

Plus, the costs of bringing a drug into the US market are higher, partially because of marketing expenses. The US is one of only two countries (the other being New Zealand) that allows direct-to-consumer advertisement of prescription drugs, while elsewhere promotion is limited to medical professionals. This raises the already steep marketing bill of drugs manufacturers. As Robert Yates, former World Health Organization senior health economist told Quartz, “the amount [pharmaceutical companies] spend on marketing is massively more than they do on research and development.” 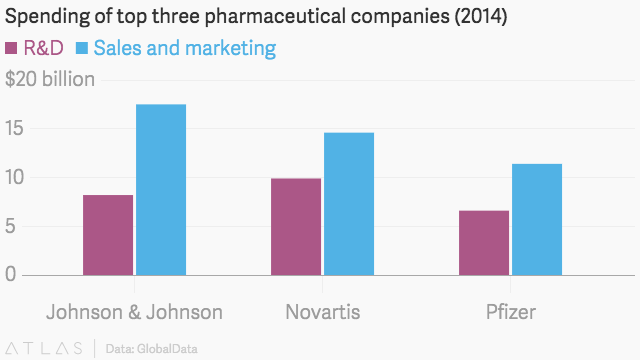 Finally, pharmaceutical companies can count on tens of billions of dollars in revenue, at higher margins than most other sectors (with the sole exception of software). So they make the most of the opportunity to advertise directly to the customer in the world’s only rich market that’s unregulated. With more advertising come more requests of specific brand names, which in turn can cause higher volumes of prescriptions, overmedication, and price hikes.

This doesn’t in any way mean that other countries are immune to high drug prices. A recent Guardian article, for instance, exposed the struggles of the UK’s National Health System (NHS), one of the biggest in the world, in supplying British patients with expensive cancer drugs. Yet drug prices that are too high for the NHS, or other publicly funded systems, are a fraction of what US citizens pay. Let’s take Daraprim as an extreme case: the same drug (pyrimethamine, Daraprim’s main ingredient) that could be priced $750 a pill in the US is currently available in India for ₹7, or $0.10.

The Daraprim case should make clear why 61 prominent US economists are among the 267 signatories of the Economists’ Declaration on Universal Health Care, a statement led by Larry Summers and subscribed to by economists Joseph Stiglitz and Thomas Piketty, presented in New York ahead of the United Nations General Assembly, on Sept. 18. Healthcare expenditure in the US far outpaces other rich countries and represents the first cause of individual bankruptcy. 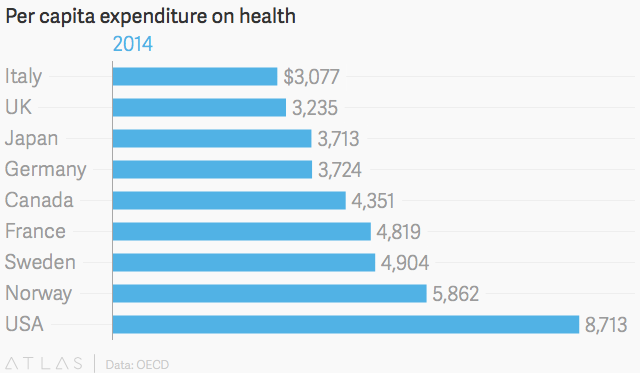 In the declaration, the economists “call on global policymakers to prioritize a pro-poor pathway to universal health coverage as an essential pillar of development.”

The document also focuses on the individual human right to high-quality, accessible health care, which, if administered through universal coverage has “accompanying benefits in both health and in protection from health-related financial risks.” Publicly funded healthcare is not simply good for citizens but also for the economy on the whole.

As Yates told Quartz, “these [economists] aren’t people who have vested interests, but who recognize that [universal health coverage] is good for society.”

Indeed, despite the US adversity to publicly funded, socialized healthcare (where citizens contribute to health coverage according to their income), the current system has proved ineffective not only in providing access to affordable care, but also in saving public resources. Although the Affordable Care Act might help in reducing costs for the government, the US government is currently in the paradoxic position of spending more in healthcare than any other in terms of GDP percentage, while covering a much smaller percentage of the overall health costs. 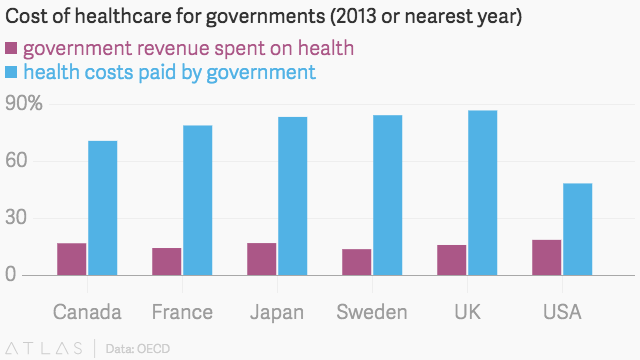 “One of every four dollars we pay in the US [for healthcare] are used for administrative expenses,” William Hsiao, professor of economics at Harvard Public Health School, told Quartz. Because there are so many insurers, each with their own sets of rules, there is a large amount of resources wasted purely in dealing with the system.

To explain it, Hsiao provides the example of an independent medical practice. The average US independent doctor, Hsiao says, deals with an average of six different insurance companies, each providing several products with specific rules in terms of reimbursement and co-pay, so the practice has to deal with an estimated 30 different plans. This becomes so complicated that the doctor has to hire a dedicated person to deal with it, and on top of it 25% of the nurses’ weekly time, and eight hours of the doctor’s, are dedicated to administrative tasks.

If, instead, there were a single, publicly funded payer—not necessarily through taxation, but with a social insurance fund based on income, that covered everyone—these costs would be eliminated. “My very rough guess would be that we could reduce US healthcare cost of 30%,” Hsiao told Quartz. It would mean going from a 17.5% GDP spending in health to about 12%—which could save the average American $2,500 a year.

But what would happen to all those administrative jobs that would become obsolete? “To be realistic about it, the savings of the initial years would have to be spent re-training the people for some other occupations,” Hsiao told Quartz. This would, however, only be an issue for the very short-term, since people would spend the savings they make on healthcare in other sectors, creating new, different jobs.

That is a concern that sits at the core of the American belief that no good comes of government’s involvement in the life of the individual—in any sphere. It’s something that profoundly differentiates the US from other Western countries, and is embodied in the country’s welfare state (or lack of thereof). The economists directly address this in their declaration, stating that “resource constraints require individual countries to determine their own definition of ‘essential.'” They, however, believe having a public entity, rather than private capital, decide what is “essential,” (what needs to be covered, and in which order of priority) is the better option.

Defenders of private healthcare think it offers choice and access to the best services. But the reality is that such services remain a privilege of the rich, who face a proportionally lower cost since insurance premiums, whether provided through an employer or independently purchased, do not vary according to the insured’s income level. The system doesn’t appear to be working, and the poor performance of America in terms of health parameters such as life expectancy, infant mortality rates, maternal deaths are proof.

But while many agree that the system needs to change, not everyone is convinced publicly funded health care is the way to go, or that it would even feasible, in the US. “You have to have a solution that fits your culture,” said Ondra, who proposes an approach to healthcare that would leverage the private entrepreneurial spirit as a driver to lower costs.

“If you can find a non-governmental solution, a rational middle ground that fits more with our dynamics,” Ondra told Quartz, that would be “more efficient and creative.”

Yates, on the other hand, thinks America might not be that far from implementing publicly funded health care. The Affordable Care Act, he says, was the first step in that direction, and now some states “are debating [adopting] health care [plans] that are socially and publicly funded.”

The power is often in people’s hands on this and, Yates believes, can move the electoral needle in the US as it has in other countries. Healthcare is a campaign issue, and not only for the left: “Donald Trump has been on the record as believing in universal health care,” Yates told Quartz, and in case a Republican won, “it wouldn’t be without precedent that a rightwing government introduces universal health care.”

As the US struggles with the dilemma, middle- (and sometimes low-) income countries the world over are adopting publicly funded systems. Sri Lanka, Brazil, Turkey, Indonesia are just some of the countries making steps toward universal health care.

Paradoxically, America’s wealth might be what makes it harder to transition. For all its wastage, the current system has “built up very powerful and wealthy stakeholders,” Hsiao told Quartz. What he calls a “rampant insurance industry” is worth about $1 trillion—a size large enough that even a 1% investment in lobbying and advertising could stall attempts at substantial reforms at the federal level. These vested interest groups aren’t, however, as powerful at the state level, where perhaps lies the real hope for the American system to finally follow the rest of the world’s lead.