Uber is expanding around the world rapidly, but its growth in Asia might soon hit a wall. A group of investors in Asia and the US are funneling cash into Uber’s biggest competitors in the region. Among the recipients are Ola, a Bangalore-based startup popular in India; Didi Kuaidi, a Beijing-based company whose service is popular in China; and GrabTaxi, a Kuala Lumpur company that has offices throughout Southeast Asia. They have also funded Lyft, the main Uber competitor in the US. Even worse for Uber, these companies are starting to show signs of cooperation, a move that could slow Uber’s progress abroad—and perhaps indicate that some or all of them could merge into a single company that’s bigger than Uber itself.

Collectively, the anti-Uber alliance has raised over $6.9 billion—about 70% of Uber’s total funding received to date. Its primary benefactors include Tiger Global, a New York-based venture capital firm that invests heavily in India; Softbank, a Japanese telco that’s quickly becoming one of the most aggressive investors in Asia; and Coatue Management, an American hedge fund with tech assets in the US and China. The overlapping investments unfolded as follows:

Despite these rounds, Uber remains the highest-valued ride-hailing company by far. But a merger could boost the valuations of its competitors.

Will Uber get out-Ubered anywhere? It’s too difficult to know right now.

Comparing ride-sharing companies is a frustrating exercise. Some report daily trip volume but not registered drivers; others report registered drivers but not daily trip volume. Some include municipal taxis in their numbers, others do not. Since Uber, Didi Kuaidi, GrabTaxi, and Ola are competing against each other and have yet to go public, they are incentivized perhaps to inflate their numbers to the media. And none of the companies will disclose market-by-market revenue breakdowns, let alone profits (which for now are surely negative).

In terms of sheer availability, Uber is the market leader in North America. But it’s greatly outnumbered in Asia. In their respective markets, Ola, Didi, and GrabTaxi each have vehicles in at least twice as many cities as Uber does. 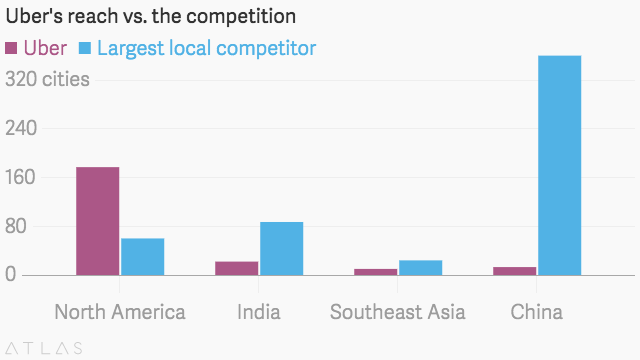 Availability, though, only tells one part of the story. Most of Uber’s revenue comes from its top cities. If this marks an industry-wide pattern, then the presence of Ola, Didi, and GrabTaxi in smaller cities might not help their bottom line all that much.

More important, Uber, Ola, Didi, and GrabTaxi each have a supply base that’s slightly different in each of their markets in Asia. In China and Southeast Asia, Uber’s competitors have built out their vehicle network using traditional taxis, although Didi did begin offering private-car rides last year. Uber, meanwhile, has generally shunned traditional taxis and instead recruited private vehicles and drivers unaffiliated with municipal taxi organizations.

Didi’s approach appears to have given it an edge over Uber in terms of daily ride volume. Uber had been logging 1 million rides a day as of June. While that number has likely increased significantly, Didi now says it’s logging over 3 million daily rides, not including traditional taxi service.

But widespread driver fraud in China makes these numbers questionable among all parties. (Didi also includes in its numbers shuttle bus and driver-drives-your-car services.)

In India, Uber and Ola have worked with a supply base that’s largely the same. Unlike other countries, 95% of India’s taxi market consists of “individual owners” or small operators (pdf, pg. 7) who have already obtained permission from the government to drive a vehicle for commercial purposes. Ola and Uber have merely moved this existing supply of taxi drivers onto their networks, and set pricing according to their own algorithms.

Ola says it’s logging 750,000 completed rides every day, though that number includes auto rickshaws (three-wheeled, open-air carts common in India and parts of Southeast Asia). Uber says it was logging 200,000 daily trips in India in July; that figure is now likely closer to 280,000 based on the company’s rate of growth.

GrabTaxi and Uber both declined to provide up-to-date ride volume figures for Southeast Asia to Quartz.

Adding to the confusion is the variant business models the companies use. Uber says it’s most popular ride-hailing service in China—the People’s Uber, known elsewhere as UberX—operates on a “not-for-profit” model, meaning it collects no take off of each ride. (In the US, by contrast, UberX charges passengers a 20% commission.) Uber does make money in China, however, off its high-end UberBlack service, generally charging passengers a commission. Didi, despite about half of its rides happening in taxis, does not charge a booking fee or commission for rides in municipal cabs; however, as of a year ago it also offers private-car rides, and it does charge passengers a commission for those.

In India, both Uber and Ola make money by charging passengers a 20% commission on bookings. In Southeast Asia, GrabTaxi uses an outlier model, charging drivers (not passengers) a modest fee per booked ride. (Also unusually, it uses a top-up system, similar to the kind used with SIM cards, for its transactions with drivers.)

As overlap among investors continues, Uber’s competitors have begun making public references to “global alliances.” While it’s possible that such rhetoric is merely meant to stir up controversy in a competitive industry, it’s also possible that consolidation is looming for GrabTaxi, Ola, and Didi Kuaidi.

Reilly Brennan, executive director of the Stanford University’s Revs Program, an interdisciplinary research program that tracks the automotive industry, says that consolidation among ride-hailing companies would bring several benefits. For one thing, companies can test out new features and services in multiple countries, giving them a broader geography to experiment in. It can also help with economies of scale.

“Global scale would allow a ride-hailing company to get even better terms on the basic food groups of running a fleet: vehicles, fuel, insurance, and service,” he tells Quartz. “Right now in the US, Uber has a fuel card for drivers who qualify with enough trips. Done globally with a company such as Shell, this could be even better.”