Today, the discussion around immigration and population growth in the United States revolves around people from Latin America, but it won’t forever: Asians are expected to become the largest immigrant group in the US by 2055, according to a new report from the Pew Research Center, and will constitute nearly 40% of the foreign-born population by 2065.

That’s a sharp change from the country’s demographic makeup 50 years ago, when the 1965 Immigration and Nationality Act was passed to remove a quota systems on immigrants. Asian immigrants made up less than 1% of the overall US population in 1965, compared to 6% today. Over the next 50 years, the group will see its share of the population more than double, to 14%.

That means Asian immigrants are poised to surpass Hispanics as the biggest immigrant group in the US over the next 50 years. (Hispanics will still make up a larger share of the overall US population; in 2065, one in four people in the US will be Latino.) 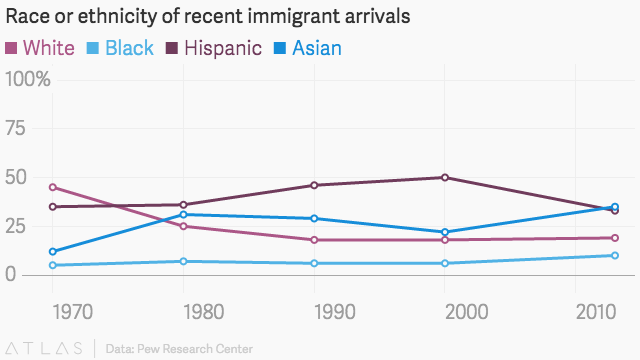 The demographic shift will mean that the United States will, in a few decades, be a “minority majority” nation. Today, white people make up 62% of the population, compared to 84% in 1965, and by 2065 that percentage will fall below 50%—and there wouldn’t be any one racial or ethnic group in 2065 that makes up a majority of the population. And if the Pew’s numbers are correct, immigrants and their children and their grandchildren will provide nearly 90% of the country’s demographic growth over the next 50 years.

Besides reporting changes and predicting trends in the demographics of immigrants, the Pew also takes a look at some of the attitudes around immigration, showing that 43% of white adults said immigrants make society worse in the long run, and 41% said they make it better.

Politicians seem to be cognizant of the white majority’s anxiety about immigration. GOP frontrunner Donald Trump launched his campaign by making racist remarks about Mexicans in the United States, and his rival Jeb Bush has come under fire for using the term “anchor babies” to refer to babies born of immigrant parents in the United States. In a fruitless attempt to soften his comments, Bush later explained that he was referring mostly to Asian immigrants, not Hispanics.