More than 20% of Americans use wearables, an online survey by Forrester found. Unsurprisingly, millennials—or Generation Y—are the strongest adopters, with 35% of the cohort using wearables, according to the survey of more than 950 US adults. But older adults are also getting into fitness trackers, smartwatches, and other wearable tech.

With Fitbits starting at $60 and Apple Watches selling for $550 and up, prices are varied enough that Americans from all income levels are dipping into their pockets for the gadgets. IDC estimates that 72.1 million wearable devices will be shipped worldwide in 2015, and expects 155.7 million units to be shipped in 2019.

Now that smartwatches and other devices are gaining widespread acceptance, the real challenge for wearable makers is getting users to stick with them and upgrade them frequently. Last year, about one-third of Americans who bought a wearable device ditched their gadgets within six months, a study by Endeavour Partners found.

That’s where smartphone apps can make a big difference, according to Julie Ask, vice president, principal analyst at Forrester. She said apps boost adoption in the wearables space by engaging consumers with otherwise barebones devices. Apps that offer badges or rewards, coaching, and other tools often keep users around longer, she added.

For example, Fitbit—the most popular device among wearable tech users, according to the Forrester survey—connects to an app where users can track fitness activities, view health data, and earn rewards for working out. The Apple Watch, Nike Fuel Band, and Google Glass are also tied to smartphone apps. 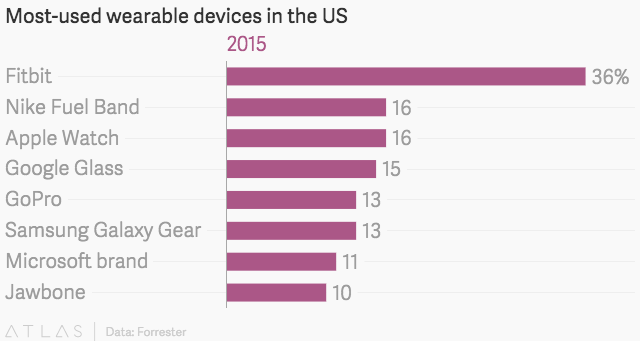 “Wearables can’t create enough stickiness on their own,” said Ask. “You need to use the apps to change the consumer behavior and that’s what going to keep consumers engaged beyond the initial three- to six-month period.”