Chinese Apple lovers have been enjoying the iPhone for some time, but the iTunes Store —one of the drivers of the smartphone’s early success in the US—has never been available in China. So today’s launch of Apple Music in China marks a noteworthy step for the company as it continues to court the Middle Kingdom.

Starting today, users in China can access a free three-month trial of Apple Music, after which they’ll be charged a 15 yuan (about $2) monthly subscription fee. Apple also will offer a library of downloadable movies in the iTunes store. But individual song downloads, as well as Beats 1 Radio, remain inaccessible.

“In the short term for Apple Music in China, it’ll be an uphill struggle,” says Alex Taggart of Outdustry Group, a music consultancy that helps foreign record labels do business in China. “It’s lacking most popular content, particularly new music. Also, Beats 1, arguably the only clear-cut successful features in the US and Europe, isn’t available in China. But both these issues may turn out to be surmountable.”

While Apple helped uproot the music business in the US and abroad, the iTunes music store’s absence from China has kept it on the periphery of the country’s entertainment industry. It’s likely that widespread piracy, fueled by internet companies such as Baidu, made the country a less-than-attractive investment during iTunes’ heyday in the mid 2000’s.

It remains to be seen whether Apple Music will be well-received in any country, including China. And China’s smartphone owners looking to get their fix of popular songs can already turn to a number of homegrown Spotify-esque streamers. 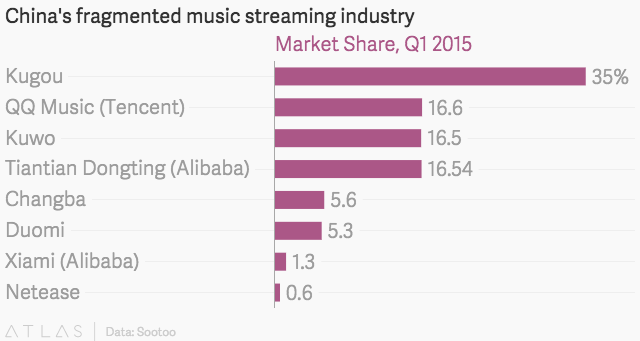 Many of these services remain free, and most offer a range of licensed and unlicensed content from China and abroad. In order to justify its price tag, Apple will have to offer something its competitors can’t—and it’s not clear what that might be, in China or elsewhere.