Racism is blighting Swedish society, and people of African descent face daily harassment and hate crimes, according to a United Nations report presented to the UN human rights council earlier this week. Yet the country is so convinced by its tolerant reputation that it refuses to acknowledge the problem. The report found:

The Swedish philosophy of equality and its public and self-image as a country with respect for human rights, non-discrimination, and liberal democracy blinds it to the structural racism faced by Afro-Swedes and Africans in its midst.

There has been a 31% rise in reported “Afrophobic” hate crimes from 2010 to 2014, according to the Swedish National Council for Crime Prevention (pdf). The UN Working Group of Experts of People of African Descent reported “a real fear within the communities, especially for young black men, that they could be violently attacked at any time.” Structural racism means that black people in Sweden have reduced access to health care and education, according to the UN report, while “the police view people of African descent as criminals rather than a vulnerable community that needs protection.” 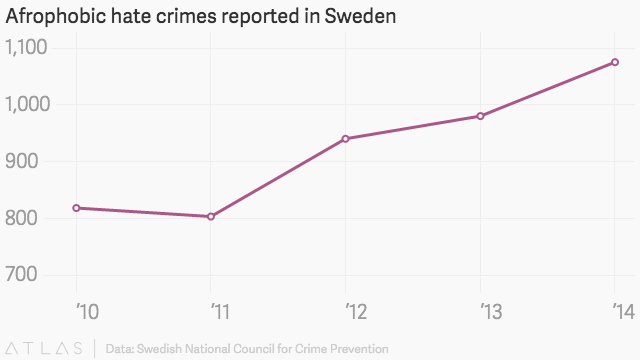 But Sweden is so convinced by its own reputation that the government has removed the word “race” from the Discrimination Act—because the law assumes that all people belong to the human race. The United Nations was unimpressed:

The Working Group is aware that to delete “race” from the lexical corpus does not eliminate racism based on racial discrimination. Rather it may be a way to ignore, minimize, or obscure the reality of the specifically “racial” racism faced by a part of the Swedish population.

There are roughly 200,000 Africans and people of African descent living in Sweden, who make up 2% of the country’s 9.6 million population. But the UN found that Sweden did not properly address or acknowledge its involvement in the transatlantic slave trade.

A xenophobic political party, the Swedish Democrats, won almost 13% of the national vote in 2014 and became the third-largest party. Yet Sweden continues to cling onto its “self-perception of being a tolerant and humane society,” according to the UN report.

Sweden has the world’s best reputation for its social and economic policies, and is understandably proud of its status. But if Sweden’s benevolent reputation is unfounded, it risks becoming a mask for the very intolerance Sweden claims to avoid.

This post was updated with details of the Swedish Democrats’ results in the 2014 general election.