After two rather miserable weeks for the biotechnology industry, one company got a pretty excellent piece of news: Spark Therapeutics, a Philadelphia based biotechnology company that went public earlier this year, announced that its experimental treatment for a rare form of blindness significantly improved patients’ sight in an essential phase 3 clinical trial with no serious side effects.

This would be a positive, but relatively minor announcement by a young biotech in many cases. However, the drug looks likely to be the first gene therapy to be approved in the United States. The drug, which is injected into patients’ eyes, uses viruses to insert a working gene to replace a faulty one that causes the condition.

The company’s shares are now soaring, after mixed updates had sent them down from their post-IPO heights. At one point during premarket trading, shares were up more than 50%, though things have cooled somewhat since: 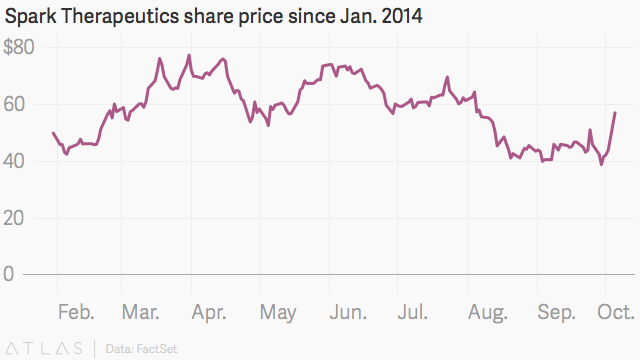 It’s certainly good news for the firm, and is a positive sign for other high-risk, high-potential companies betting on these kinds of treatments, such as bluebird bio.

The medical potential for these kind of treatments is huge. They could mean the effective end of some diseases and disorders that have been impossible to cure or in some cases even treat effectively to this point.

But past efforts to make these drugs—and there have been hundreds of them—have ended in failed companies, disappointment, and, in one case, a death. None have made it to market in the US, and just one of questionable efficacy has been approved in Europe. Even recently, firms attempting to create them have seen their shares plummet after disappointing clinical trial results.

These drugs will in many cases be one-time cures, which is the reason Spark chose the stock ticker “ONCE.”

Because they’re so complicated, often targeting extremely small populations (around 3,500 initially, in the case of Spark’s drug), and represent many years of research, firms may charge as much as $1 million for a treatment.

That has led patients, payers, and companies to think about new models for how to pay for the treatments—everything from installment plans to annuity-type payments based on how well the drug performs over time have been suggested.

FDA approval, which the company will seek next year, is anything but certain. It was a small trial, and though it succeeded in restoring vision for patients who were progressing towards total blindness, it did not improve acuity, which was a secondary goal. And there’s some question of whether these vision gains will last, even though a lasting cure is at least theoretically possible.

But for an industry that’s endured weeks of stories about companies buying up drugs they didn’t invent only to hike the price, positive news from an upstart with a drug that might help save young children from blindness is very welcome.