The Economist Intelligence Unit (EIU) ranked the country first in its latest quality-of-death index, which uses 20 quantitative and qualitative indicators to measure the effectiveness of end-of-life care in 80 countries. The measures include the the quality of palliative care, affordability, the health care environment, and community engagement.

How we die is becoming a critical topic as populations live longer, often with multiple diseases requiring complex (and costly) management. Developing countries in particular grapple with how to deliver basic pain relief to the dying. Some have seen notable improvements in recent years: Uganda has dramatically increased the availability of morphine through a public-private partnership between the health ministry and Hospice Africa, a British charity.

Not surprisingly, rich countries generally did better than poor ones in the rankings. But there are noteworthy variations: the US came in ninth place with a score of 80.8 (out of 100), far below the 93.9 score achieved by Britain, where complaining about health care is as popular as grumbling about the weather: 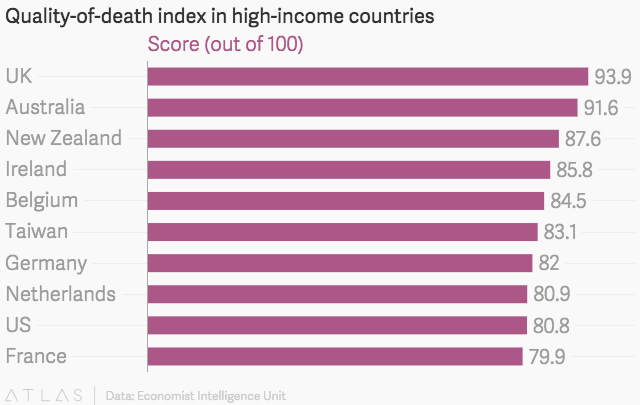 Costa Rica ranks top among middle-income countries, thanks in part to extensive volunteer networks that support public services, according to the EIU: 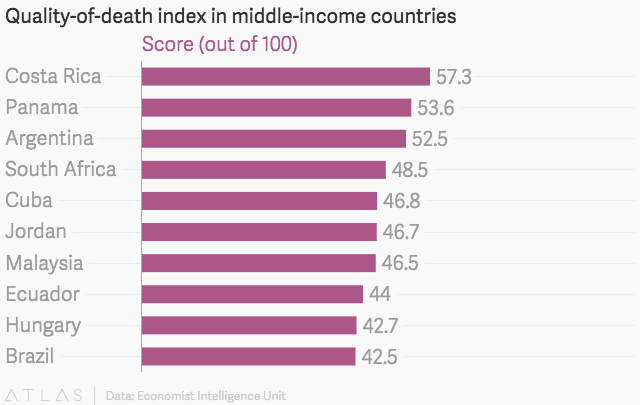 The most striking finding in the report is that Mongolia, a poor country with few provisions for end-of-life care in 2000, now leads the low-income countries with a score of 57.7, which puts it 28th overall, above a host of more advanced economies. It “overachieves by some margin given its resources,” according to the EIU: 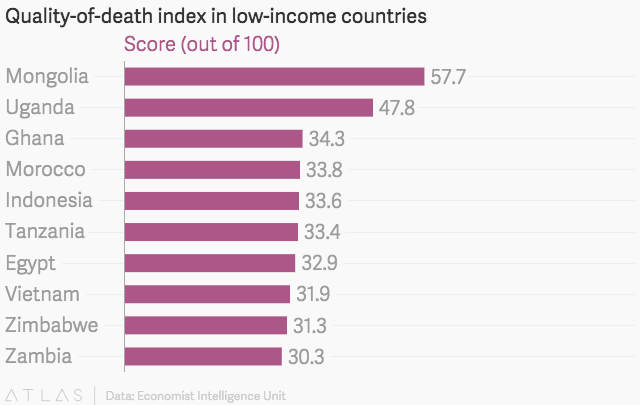 Remarkably, Mongolia’s performance is largely attributed to the work of a single doctor, Odontuya Davaasuren, a pediatrician who learned about the latest advancements in end-of-life care at a conference in Sweden and brought some of the ideas back to her home country. When Davaasuren set up the Mongolian Palliative Care Society (MPCS) in 2000, the country had no hospices or palliative care teaching programs. “We did not even have the terminology for palliative care,” she says (pdf).

According to the EIU, her work helped establish 10 palliative care facilities in Ulaanbaatar, with provincial hospitals also now able to accommodate patients in need of such care. Palliative care is now included in health and welfare legislation, and taught at medical schools. Affordable morphine is now available and prescribed more widely. The country is also now expanding non-cancer and pediatric palliative care services, in addition to “outpatient consultation and nursing, home care, and spiritual and social services,” Davaasuren says.

In spite of recent progress around the world, the EIU notes that experts estimate that globally less than 10% of people who require end-of-life care actually receive it.