My heartiest congratulations to you on being awarded this year’s Nobel Prize in medicine.

It is a rare achievement. To get there, you answered a call from your country’s leader in time of war. For years you tested countless herbs without success, but you didn’t stop till you found artemisinin. Even after that you worked tirelessly for 30 more years to fight prejudice and your native China’s own limitations to get the malaria drug recognized by the World Health Organization.

Yours is a scientific tale that will be told for generations to come, and you and all those involved in the effort deserve every praise.

Artemisinin has saved millions of lives of those infected with malaria. As you yourself say, the prize is a recognition of the what traditional Chinese medicine has to offer the world.

And now you have a chance to save even more lives.

I am sure you are aware of the countless poachings in Africa and beyond to find ingredients for the wrong brand of traditional Chinese medicine. No one is healed, but countless elephants, rhinos, tigers, pangolins, manta rays, and other endangered animals are lost.

Many are going to misinterpret the praise coming your way to be praise for this brand of traditional Chinese medicine, which has become a $60 billion industry. Its practices don’t follow the rigors of modern science that you do. Most of the time the treatments don’t work, and if they ever do, no one knows if they will again.

China’s economic miracle is pulling millions out of poverty, but it is also increasing the demand for this kind of traditional Chinese medicine. Just consider the rise in the number of poachings for one animal in one African country. 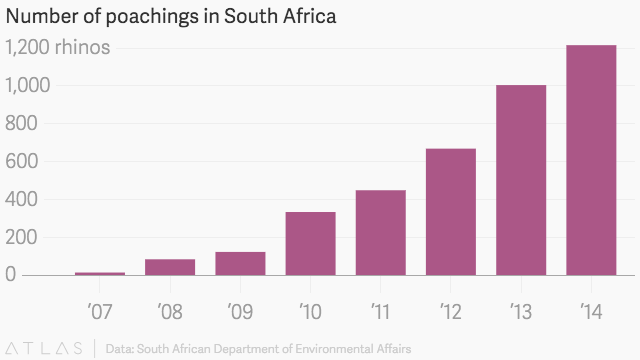 You were proud to have isolated artemisinin with help from ancient texts not just because it could fight malaria parasite, but also because it had an unusual chemical structure. By elucidating its structure and understanding how the drug works, you also developed a powerful derivative dihydroartemisinin. This is the perfect marriage of ancient knowledge and modern science.

While there are Chinese herbs that may hold wonders like artemisinin, you and I know that rhino horns have nothing special in them. The chemical keratin that make up the horn is no different from the chemical that make up human nails. The same is true of elephant tusks, pangolin scales, and tiger claws.

And even if there is a hidden drug in a natural source, you know that the only way to turn it in to a useful drug is to isolate it and then find ways of manufacturing it in chemical industries at large scale. That is true not just when it’s an animal-based source, but, as the example of artemisinin make clear, many times even when it’s a plant-based source.

Your work has already inspired many Chinese researchers to take the hard route. But those who misinterpret the praise as an excuse to spread their pseudotherapies wider could cause extinction of many species under the false hope of cures.

The Nobel Prize is the highest honor a scientist can receive. For right or wrong, whatever you say this week onwards will have its worth in gold. When you raise your voice, the world will eagerly listen. And even if you don’t say anything, people will find ways of using your story as an inspiration.

That is why I write to you with a plea. Use this august platform of the Nobel Prize to rally for a cause. You can, as an expert who has shown the world the true potential of traditional Chinese medicine, also tell its practitioners to mend their ways and stop the meaningless killings.

It may be daunting, but you hold the power to reform this multi-billion dollar industry. People will follow your lead and, when they do, you can rebrand the image of traditional Chinese medicine from a pseudoscience to a modern science.

Artemisinin has saved millions of lives, and the Nobel Prize it got you can save even more.