US multinationals in the Fortune 500 doubled the assets they hold in foreign subsidiaries between 2008 and 2014, taking advantage of loopholes in US and foreign laws to keep $2.1 trillion out of sight of tax authorities, a new analysis shows.

Here are the top 30 companies that disclose assets booked offshore, according to the Center for Tax Justice’s analysis of SEC filings. Apple leads the pack with $70 billion more held offshore in 2014 than in 2013, when a Senate investigation found the company pushed the limits of US and Irish law to keep its earnings taxed at 2% or less. 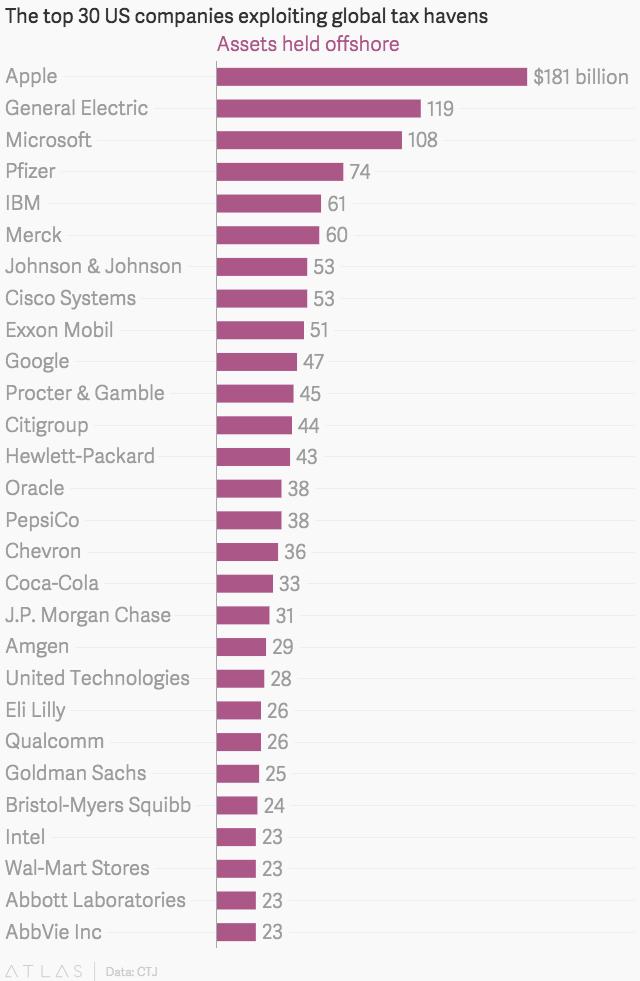 At least 72% percent of the Fortune 500 operate subsidiaries in tax-haven jurisdictions—one in four of which are in the Cayman Islands—costing the government between $26 billion and $90 billion a year. The 57 Fortune 500 companies that disclose estimates of what their tax liability would be if they did not book their profits offshore would owe $184.4 billion in outstanding federal taxes.

Avoiding a tax bill of that size require a web of shell companies. PepsiCo, for example, operates 132 subsidiaries in offshore tax havens—one of their structures was a finalist last year in our inaugural tax-avoidance power ranking. Nike, which holds $8.3 billion offshore, has 52 subsidiaries, including some named after its shoe lines.

While the Obama administration has proposed closing loopholes that allow companies to shift profits and hide assets from the IRS, corporate lobbyists have thus far been able to keep them from becoming law.