Do you earn a decent salary, but live paycheck-to-paycheck? If so, you are part of a growing segment of the American population: the income rich-ish and asset poor.

We tend to associate empty bank balances with those on the lowest rungs of the income ladder. But many of America’s upper middle class have almost no emergency cushion and are woefully unprepared for retirement. And years into the recovery, they are still struggling, leaving the entire economy vulnerable.

Median household income in America is about $55,000. You’re considered doing relatively well if you earn more, particularly in low-cost areas. That’s what they bring in, but what do they really have? The figure below plots financial assets held by the upper middle class (household income from $50,000 to $75,000, and $75,000 to $100,000) aged 40 to 55. Financial assets are any assets a household owns that isn’t a house, car, or business, which means it includes all retirement funds. 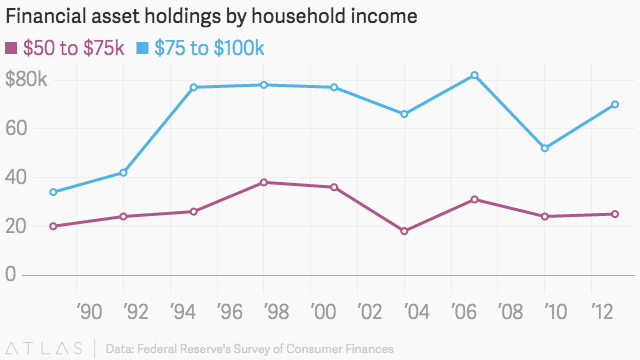 Even a relatively high earner who has been working many years typically only has $70,000 in financial assets, which isn’t even a year’s salary. That’s just the average—about 25% of upper-middle-class 40- to 55-year-olds have less than $17,500 in financial assets. You might find some solace to hear this is nothing new. Financial assets trended up in the 1990s, and have nearly recovered since the financial crisis. But one reason asset balances went up is the increased popularity of 401(k) plans. In the 1980s, companies saved for their employees through defined benefit pensions, now people do it for themselves.

The figure below is financial assets without retirement accounts. And it looks like the upper middle class has fewer assets than ever. 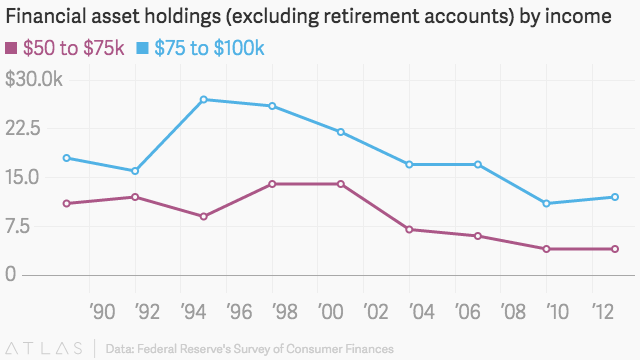 Of course, 401(k) savings probably displaced other forms of saving. That is, after putting money into their retirement accounts, people don’t have much left over to save in other ways or don’t feel the need to do so. But this could also lead people to rely on those accounts in a pinch, which is a bad strategy since retirement accounts are less liquid and incur penalties for early withdrawal. The fact that the average upper-middle-class household has just $12,200 in non-pension financial wealth is disturbing. Even worse, within that group, about 25% of the higher earning population had only $3,200 in 2013. It’s no wonder one quarter of all American households couldn’t come up with $2,000 if they faced an emergency—it’s not just low earners.

The financial picture gets even darker when you factor in how much debt the upper middle class has. Below is the leverage ratio (similar to how people assess bank health), which represents how much debt someone has relative to their assets. 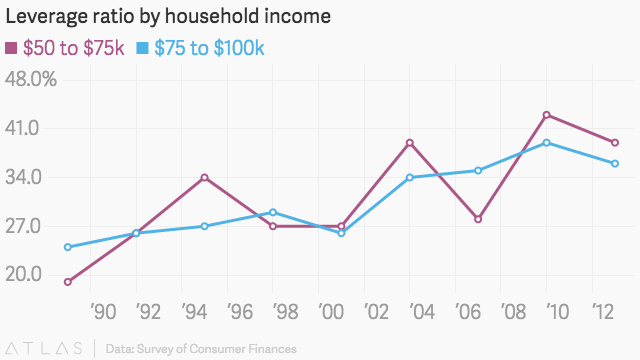 The majority of the debt is related to housing, and, increasingly, student loans. In terms of assets, most wealth remains tied up in real estate. As the housing crisis proved, that’s a risky proposition if you don’t have much in liquid savings. If you lose your job, there’s no cushion to ensure you can still pay your mortgage.

It’s popular to say that the US economy relies on consumers spending to keep it humming. That thinking justifies high levels of household debt as a trade-off for a booming economy. But that’s wrong. Consumer spending isn’t what makes a healthy economy; it’s people building and creating things. To support those activities, consumer spending needs to be stable and predictable.

The problem with no savings is that when something goes wrong, or you retire, you suddenly need to cut back. If that happens, it’s painful not only for those individual households, but the broader economy. And it’s not just low earners who are vulnerable.