Corn and soy are in nearly every meal that Americans eat. From high-fructose corn syrup sweetening sodas to soy-based livestock feed transformed into steaks and nuggets, a few major crops dominate the US food chain. Now, new research highlights just how worrisome this trend is for the country’s food security.

In a study published in August in PLOS One, US researchers have quantified for the first time how much species diversity we are losing, due to our focus on major commodity crops—up to 19% in some areas.

The danger of a drop in crop species diversity has been recognized for decades now: As farmers plant more and more commodity crops like corn, they’re planting fewer alternatives, leading to a loss in crop diversity, which makes the country’s food supply more vulnerable to problems like pests or climate change.

Between 1978 and 2012, overall crop species diversity in US agricultural production fell about 10%, discovered the team of researchers from Kansas State University, North Dakota University, and the US Department of Agriculture (USDA).

Researchers also found that crop species diversity fell approximately 19% across the Heartland Region, an area historically known as the Corn Belt, consisting of Illinois, Iowa, Indiana, and most of Missouri, and parts of Ohio, Minnesota, South Dakota, Nebraska and Kentucky. Some smaller regions, including the one on the West Coast that produces most of the country’s fruits and vegetables, have maintained high levels of diversity, and in one it even increased. 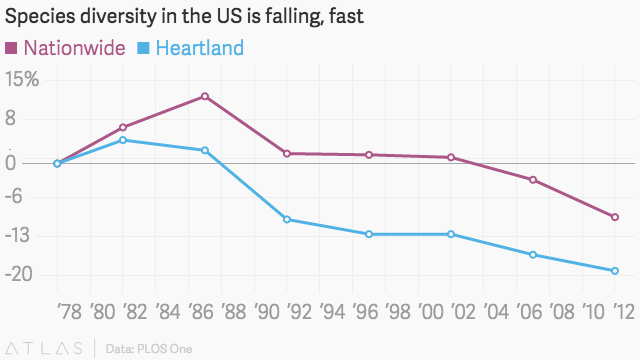 The researchers based their calculations on three decades of USDA census data, which is collected every five years.

Speaking to Quartz, lead researcher Jonathan Aguilar cited several potential causes of the dropping species diversity, including the economic incentives and improved technology that make corn and soy the most lucrative crops to plant, policies like the promotion of ethanol from as an alternative fuel source, and increasing demand in China for US soybeans.

But he remains hopeful about the country’s ability to reverse the trend. “Theoretically, crop species diversity can change relatively rapidly,” wrote the researchers in their conclusion, “so the potential for swift positive change is considerable.”