Twitter today (Oct. 13) announced that it will be laying off 336 employees—about 8% of its workforce—as the social network struggles with slowing user growth and a lagging stock price.

The move comes just over a week after Jack Dorsey was officially named the company’s CEO—almost four months after Dick Costolo stepped down from the role. According to a note sent by Dorsey to staff today, the biggest cuts will come to the product and engineering departments, although no figures were specified. Twitter’s share price did not react sharply, up about 1.5% in pre-market activity.

Though Dorsey has publicly expressed his disappointment in the company’s performance—calling it “unacceptable” when it reported its second-quarter earnings—he hadn’t made any mention of layoffs or cost-cutting measures. In a letter to staff today, Dorsey said of the layoffs: “This isn’t easy. But it is right.”

Insiders say Twitter has become bloated in recent years, according to Recode, which reported on the layoffs Oct. 9. The company has more than doubled its staff in two years, growing from 2,000 employees in June 2013 to 4,100 in June of this year, according to SEC filings. While layoffs are never good for morale, swift action is generally better than any extended period of uncertainty. 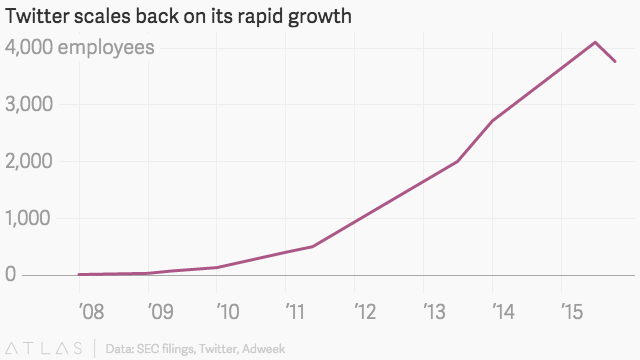