Just weeks after record numbers of investors signed up to participate in China’s rapidly growing stock markets in April, the markets plummeted, wiping trillions of dollars worth of value from the companies listed there. Investors sold out of Chinese stocks, even as China’s state-owned companies tried to prop up the markets, so quickly that it was called  a stampede.

But somehow during the massive correction, and the weeks that followed, the number of people in China opening new brokerage accounts to buy “A-shares,” as Chinese mainland-listed stocks are called, continued to rise at a steady pace. On June 12, the day markets crashed, there were 87.9 million brokerage accounts registered to the public trading A-shares, but by the end of September there were 94 million, data from the China Securities Depository and Clearing Company shows: 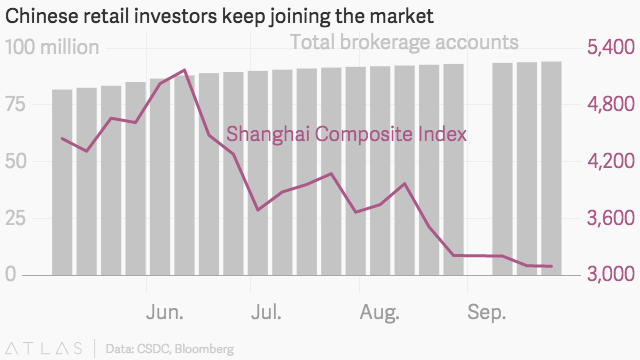 The state-run agency showed no sign-up data for the week ending Sept. 4, but shows that an average of almost 590,000 people (link in Chinese) opened a trading account in China each week between early May and late September.

It’s not clear why so many people would join a stock market that was tanking so badly, especially as short-selling is restricted in China. One potential reason for the continued rise in new accounts is that people were encouraged by a government that was pulling out all the stops to prop up the market, and that state media encouraged buyers not to desert the wobbly exchanges.

Another possibility is that people simply saw bargains in the falling prices. After all, the correction may have wiped out almost all of this year’s gains on the Shanghai Composite Index, but compared to this time last year it remains up by 40.9%. The tech-heavy Shenzhen index remains up by 34% this year so far, and almost 42% higher than a year ago.