Thousands of Chinese investors who have sunk an estimated $6 billion into Fanya Metal Exchange are trying to get their money back through public protests and even, at one point, kidnapping the exchange’s founder and turning him in to the police. The government has mostly ignored their plight, despite the fact that China’s state banks recommended Fanya to customers, its national television stations tacitly endorsed the exchange, and local regulators approved it.

Now these investors, along with experts in the global metals industry, are starting to wonder: Did Fanya ever really buy, sell, and trade billions of dollars of rare metals, as it claimed—or was it, as one Chinese analyst says, a Ponzi scheme?

Quartz spoke to investors, industry experts, analysts, and Fanya’s business partners about the company. The picture that emerges is of an opaque trading system with prices so far disassociated from the global buying and selling of rare metals that outside of China it was referred to as a “parallel universe.” The fact that Fanya managed to grow and thrive in China for four years despite this disassociation raises questions about whether the nation’s regulators are ready for the financial market reform leaders are pushing.

Bubbles and fraud have existed for years in China’s regional exchanges, but Fanya was special, Tang Jihe, a precious metals analyst, told Quartz on the condition his employer not be named. Fanya became a nationwide phenomenon, one that promised to give China influence in the global market. The central government welcomed Fanya as an innovator in China’s immature financial markets, and the provincial Yunnan government where Fanya is based needed a big taxpayer, he said.

Fanya did not respond to numerous requests for interviews on specific questions about its business model. The national regulator, the China Securities Regulatory Commission, and the Yunnan provincial government’s financial regulator asked that questions be sent by fax. Fax numbers supplied by both regulators were either busy or out of order over dozens of attempts.

A short history of Fanya

Fanya Metal Exchange was first established in 2011 as a securities and futures exchange: Buyers traded with other buyers, at the same time as conducting “spot market” trades, in which rare metals are purchased or sold for immediate delivery to an end user. This hybrid trading model is common at other domestic trading platforms in China that deal in commodities like rice and coal, as well as wine, tea, and even antiques.

China’s state council began to “clean up” (all links in Chinese unless indicated) trading platforms nationwide in late 2011, after some of these exchanges artificially bid up prices. It banned financial investments backed by goods traded on such exchanges, and allowing only spot trading.

Fanya said in March 2013 that it was only doing spot trading. But a month later, Fanya chairman and founder Shan Jiuliang, a well-connected veteran commodities trader, said the exchange would start a new “entrusting sales” program. It would allow retail investors to lend money to buyers to pay for products when a sell order matches a buy order on the electronic trading platform, according to Fanya’s own description.

Some suspect there were no end buyers at all.

Retail investors would get a “warehouse warrant” of the rare metals that their money had bought—a certificate from the warehouse where the metals are stored, pledging that they are there. The end buyers of the metals, the “entrusting companies,” would pay these investors daily interest, or a “compensation for delayed delivery.” That daily interest is 0.003%, which adds up to the annual return of 13.7% guaranteed by Fanya on “Ri Jin Bao,” the financial investment that burned so many investors (link in English).

Now investors and even some of the company’s partners suspect that there were no end buyers at all. “They have never publicized the names of the entrusting companies,” an agent from Kunming who sold Fanya’s investment products for the past five years told Quartz. That makes him feel the buyers never really existed.

Since April, the exchange has changed its trading rules several times, first allowing investors to withdraw their money only after several days, then freezing it entirely.

Wang, a 65-year-old retiree from Shanghai, participated in the exchange—and in the capture of chairman Wang in August. He told Quartz that Shan was asked to show buyers contracts to prove the rare metal inventory actually exists, but Shan was speechless. Investors have no idea how much of their 40 billion yuan was actually used to buy metal, and how much was just stolen, he said. “How can there be a trading platform in the world where 100% of its buyers break their contracts?” he asked.

When it started in 2011, the metals exchange was pitched as a more transparent way to price and trade obscure elements like indium and bismuth that are used in electronics. But it was never warmly embraced by metals traders and investors outside of China, in part because it charged companies fees to join, analysts said.

The exchange’s trading volume grew quickly—it claims an accumulated turnover of over 320 billion yuan (around $50 billion) by the end of June 2015. But metals experts outside China viewed those figures as highly suspicious, because Fanya’s increased trading volume was not reflected by the supply and demand of the metals themselves on the open market.

Investors received certificates for the metals that they bought on Fanya, which guaranteed that physical amounts they had purchased were held in a warehouse. But, analysts say, there’s just no way that those amounts of rare metals were actually being purchased.

If there had been that much buying in bismuth, international “prices would have quadrupled,” Christopher Ecclestone, a mining strategist with investment bank Hallgarten & Co., told Quartz.

“It is all virtual.”

Ecclestone now believes that Fanya may be a retail investor version of the Qingdao Port metal scandal (link in English) that burned big international banks last year. Chinese companies borrowed hundreds of millions of dollars from banks around the world, using metals like aluminum and copper stored at warehouses in Qingdao as collateral. These companies allegedly pledged the same metal multiple times (link in English) as backing for loans, getting several times the bank financing they should have, and leaving banks with big write-offs when they couldn’t pay the loans back.

At Fanya, though, “instead of selling [metal] two or three times over again,” Ecclestone believes, “maybe they sold it 50 or 60 times” to unsuspecting retail investors, who don’t realize what they’re buying is not backed by any real collateral.

“They are not affecting the global supply because they don’t actually have any metal,” he said. “There is no one mining it and no end user.” Instead, there’s a “parallel universe” that the Chinese are trading. “It is all virtual.”

Was it a Ponzi scheme?

An article published in Futures Daily in August goes even further, detailing how Fanya may have set up what the author calls a Ponzi scheme. Witten by Tan Na, who is identified as an analyst at Guangzhou-based Guangfa Futures, the article was picked up by other Chinese media, including by the well-respected financial outlet Caixin.

Fanya, Tan’s theory goes, played the role of a buying company itself—at a much higher price than in other spot markets—placing orders with  companies that mine rare metals. These companies, in turn, paid member fees to get access to Fanya’s trading platform. After Fanya placed orders with them, it asked the member companies to place new orders with 20% of the money they got from their sell orders as deposits, Tan claimed.

Those producers never actually went through with the deal and sold any metal, she claimed, but in this way, the rare metals’ prices on Fanya’s electronic trading platform could be artificially bid higher and higher, in perpetuity. In the first year, the 20% deposit would be used to pay investors’ 13.7% annual interest, and Fanya pocketed the rest. In the next year and the years that followed, the old investors’ returns were paid by new investors’ money.

Fanya told Caixin that Tan’s claim was not true at the time the theory was first published.

The analyst is no longer talking to the media for safety reasons.

Attempts to reach Tan Na were unsuccessful. Guangfa Futures told Quartz that they don’t have an employee by that name.

But Tan Yamin, a reporter at Futures Daily who has talked with Tan Na and has been following Fanya closely, told Quartz that Tan Na is no longer talking to the media for safety reasons. Tan the analyst told Tan the reporter that Fanya had tried to identify, track, and harass her back in August after she published her report.

Whether the exchange was a Ponzi scheme or not, the metals prices on it are certainly outliers.

But the indium prices on its electronic trading platform were completely disconnected from other spot markets both home and abroad: 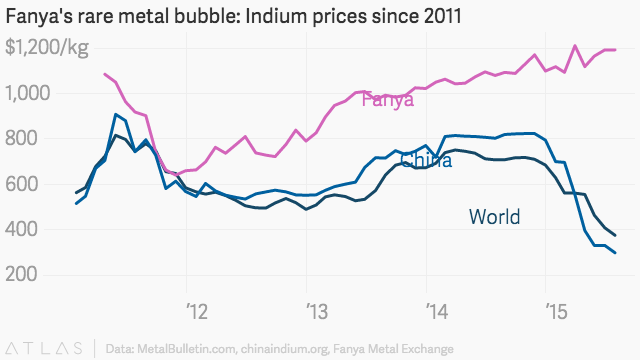 In 2014, China consumed 82 tons of indium while producing 460 tons, according to the state-backed China Nonferrous Metals Industry Association. Both numbers are an increase from the previous year—but Fanya’s reported storage is still almost enough for 10 years’ domestic consumption. 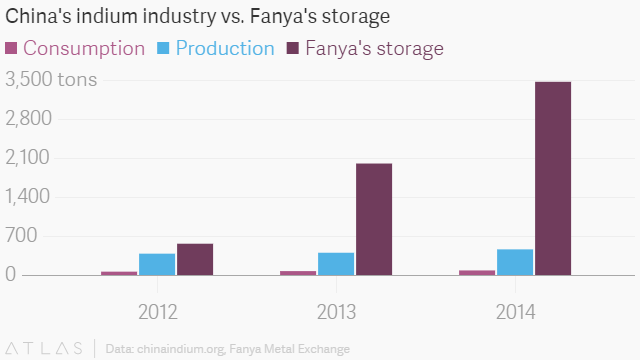 Whatever the exchange’s real business model was, the outlook for investors right now seems grim. Fanya’s founder Shan recently denied in an interview that he had taken any investors’ money. It is now held, he said, by hundreds of “financiers” whose names he has given to the government, and it is not Fanya’s responsibility to pay it back.