China’s trade data have been a reliable monthly horror show over the last year, and September was no exception (link in Chinese). Exports fell nearly 4% from year-earlier levels, while imports dove an astonishing 20%. 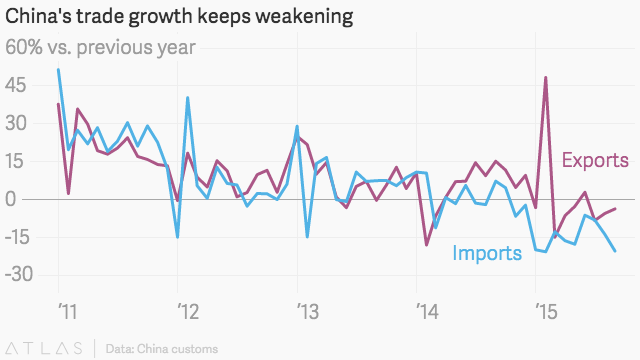 One thing, however, is growing quite quickly. 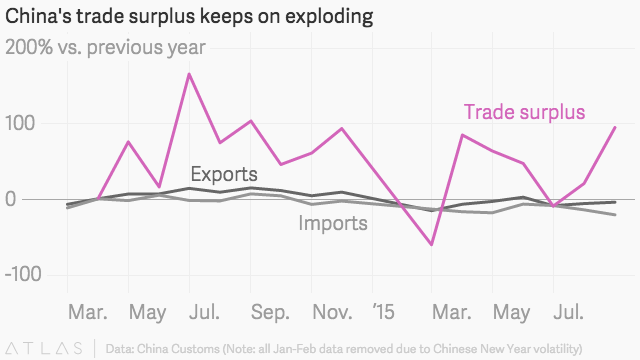 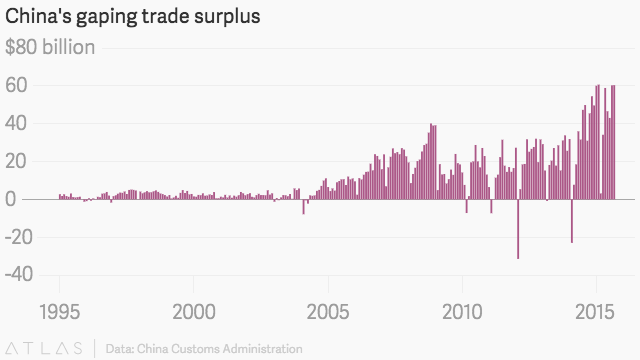 Some of that gap might be due to slumping commodity prices weighing more heavily on China’s import values. Still, the boom in extra exports reflects the fact that China continues to benefit from the global economy much more than the global economy benefits from China. This is because the People’s Republic hogs more than its due share of global demand.

To get why, let’s first look at how China has engineered its yawning trade surplus. As economist Michael Pettis explained in his book The Great Rebalancing, when one country rigs its economy to produce more than it consumes, it amasses extra savings that it then foists onto its trade partners.

For more than a decade, this is exactly what the Chinese government has done. By keeping interest rates and the yuan artificially cheap, it suppressed its people’s purchasing power and moved money out of the hands of Chinese consumers, shifting it instead to Chinese manufacturers at artificially low rates. Thanks to these subsidies, Chinese manufacturers cut export prices, driving global competitors out of business.

Take China’s steel industry, for example, which is exporting like there’s no tomorrow. While steelmakers around the world are foundering, China unloaded 11.3 million tonnes of steel products onto the global economy in September—9% more than it has ever exported before. 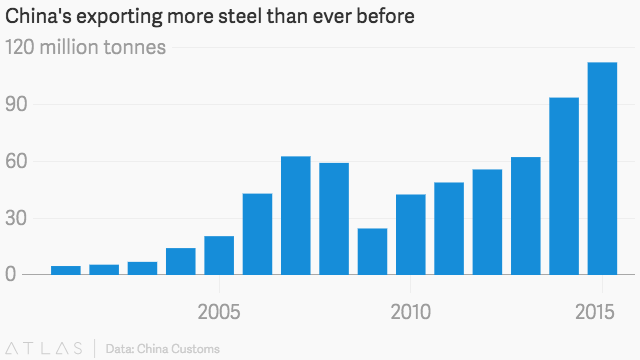 A problem awaits those countries that absorb China’s excess savings, however—and it’s mainly been the US. As the flood of cheap Chinese goods shuttered American factories, China’s central bank shoveled its savings glut into US investments (particularly government bonds). Meanwhile, to weather the hit to its own output and, as a result, tax revenues, the US encouraged a private-sector borrowing spree.

The perilous housing market bubble that resulted shouldn’t have surprised anyone; for advanced economies, the only way to absorb another country’s excess savings is to take on debt or stomach higher unemployment, as Pettis argues.

Though the US housing collapse is a distant memory, the gaping trade surplus that caused it keeps swelling bigger and bigger. Chinese leaders have long promised to “rebalance” their economy, meaning to stop subsidizing cheap production at the expense of consumer buying power. But as today’s trade surplus data suggest, there’s no sign so far of anything but more gloom for the global economy.