We’ve all heard doomsday predictions about what global warming means for coastal US cities. And now a new, interactive map from nonprofit climate science publication Climate Central illustrates precisely how American cities will fare under the best and worst possible climate futures—and which ones will disappear completely.

Climate Central is not the first group to visualize how the US landscape will be altered, but as Wired notes, this map draws on new research published in the Proceedings of the National Academy of Sciences (pdf) that ties carbon dioxide levels to sea level rise and layers in topography and population statistics.

The report doesn’t unearth exactly when water will begin flowing into coastal cities, but notes that our current carbon emissions will lock in changes that could start occurring in as early as 2200. (Even if we stopped burning fossil fuels today, carbon pollution already in the atmosphere would be high enough to register an effect for years to come.)

The map uses four different scenarios laid out by the Intergovernmental Panel on Climate Change. In the best case, aggressive cuts would cause carbon emissions to peak within the next five years; in the worst case, pollution goes unchecked and emissions continue climbing through the year 2100.

Even with aggressive carbon cuts, cities like Miami and Jacksonville, Florida, could lose more than half their land. New York and Boston are in danger of shrinking by a quarter.

New Orleans, meanwhile, is pretty much doomed any way you look at it. All of the city’s population-weighted area, based on 2010 US Census data, is expected to fall below future sea levels if pollution goes unchecked or only minor carbon cuts are implemented. With aggressive cuts, still more than half of the area currently populated will go under water. That’s also true for parts of Florida, including Cape Coral, Miami Gardens, and Hollywood.

If triggered, the collapse of the West Antarctic Ice Sheet (WAIS) covering a portion of Antarctica could leave tens of thousands of more Americans without dry land, even with extreme carbon cuts. 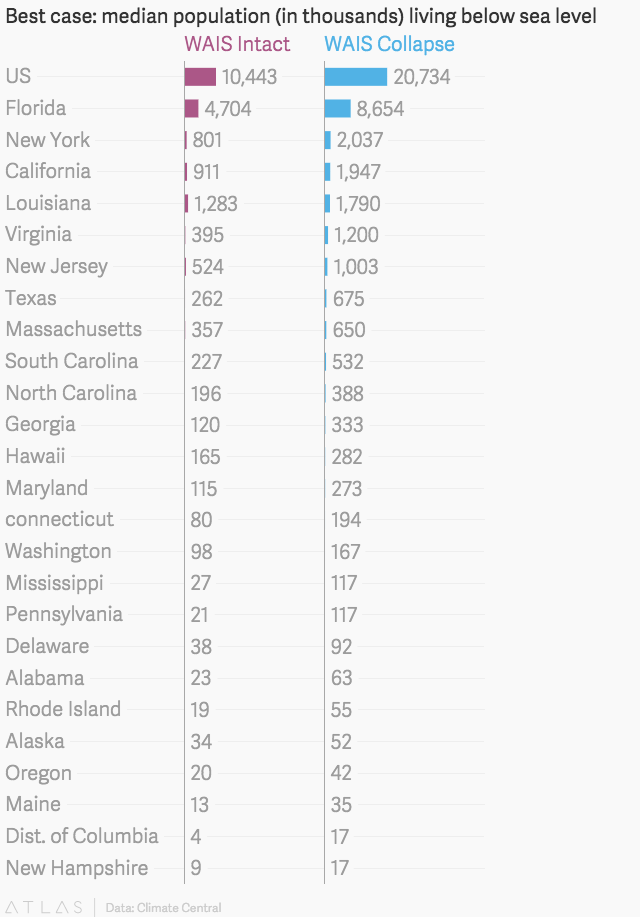