Walmart shares are cratering after the mega-retailer warned that increases in employee wages and investments in e-commerce will continue to take huge chunks out of its profit for the next few years. 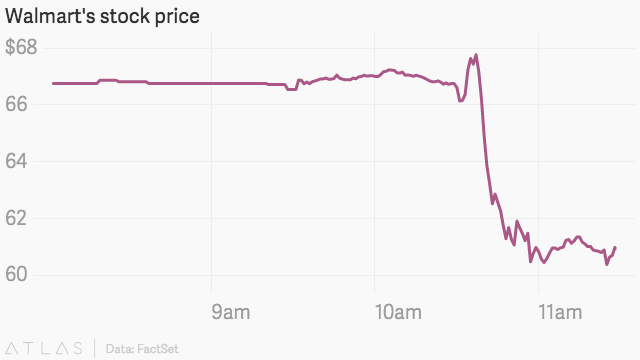 While Walmart executives tried to put a positive spin on a dour sales and profit outlook, telling investors on a conference call that “we’re in investment mode” and “we’re a growth company,” Walmart shares fell roughly 10%, as the company lost the equivalent of the entire market value of department-store chain Macy’s.

Even a new $20 billion share repurchase plan—which typically would be viewed as an investor-friendly move—didn’t do much to make investors feel better about an outlook for flat sales and the 6% to 12% decline in earnings per share that the company is now forecasting for fiscal year 2017.

CEO Doug McMillon has made clear his plans to overhaul the world’s biggest retailer—but doing so comes at a hefty cost. The company has been plowing money into its e-commerce business, building new warehouses and revamping its supply chain. It also raised its starting wages to $9 an hour this year and $10 next year, costing the company $2.7 billion over the next two years. An earnings rebound isn’t expected now until fiscal 2019, the company indicated.

“This is a really big ship and you have to deal with it one piece at a time,” Walmart US CEO Greg Foran told analysts.

That may be true, but don’t count on Wall Street to be patient about it.