The pope may be a hit with millennials, but God is not.

Multiple studies this year confirm: As Quartz first reported in June, a survey of several studies spanning nearly 50 years and 11 million US students, published in PLoS ONE, shows that American millennials are far less religious than previous generations. Among college students, in particular, the study found that the nation’s percentage of nonbelievers has tripled since the late 1960s. 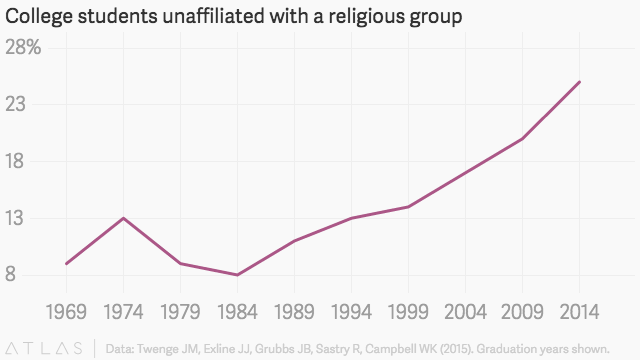 Attendance at religious services has also plummeted; whereas very few students opted out of church services in the early 1970s, more than a quarter of millennials abstained in the 2010s. 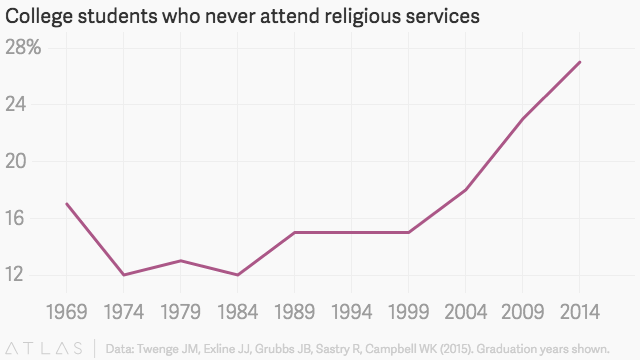 “Overall,” the study says, “these results suggest that the lower religious orientation of Millennials is due to time period or generation, and not to age.” While studies have always shown that younger people tend to be less religious, this multi-decade analysis demonstrates an actual shift in American culture.

Another study conducted by the Pew Research Center, also published in May, found similar results. Unlike the PLoS ONE study above, which looks at historical data on students, this one polled across generations to see where they stand today.

The Pew study found not only that a large portion of young Americans identify as atheist or agnostic, but also that older millennials become even less religious as they age. And non-belief, as it turns out, appears to have “a higher retention rate than most other major religious groups,” the study observes: 67% of millennials who were raised without religion remain unaffiliated later in life.