This article has been corrected.

China’s National Bureau of Statistics released the country’s third quarter GDP growth rate today, and at 6.9% it was the lowest quarterly growth the country has clocked in more than six years, or since the first quarter of 2009. 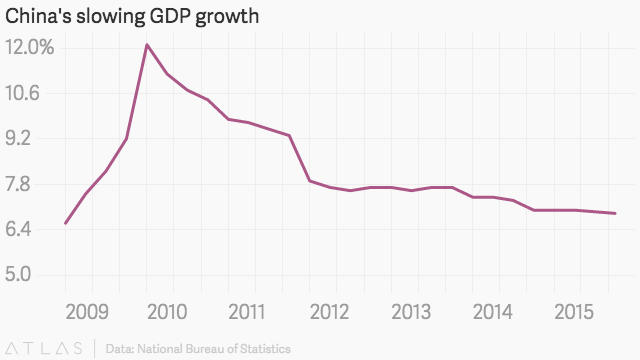 Slowing GDP growth is part of China’s transition to a “new normal” of domestic consumption-led growth, and a quarterly number under the annual growth target of 7% was expected by analysts, investors, and governments. What’s interesting about today’s announcement is the open skepticism with which the rest of the world is greeting even this weak figure, which, after all, still beat analysts’ estimates of 6.8%.

As one analyst from London’s IG Group, a spread betting firm, writes:

The 6.9% Q3 GDP print really just makes one question the veracity of both the Q2 and Q3 numbers. It’s hard to be overly optimistic about the headline number, especially given the range of other data released today.

The GDP beat is surprising, given that the monthly FAI and industrial production figures slowed considerably, and much faster than expected.

The data would suggest that retail sales is holding up the data and there are other areas that the government is factoring in consumption and services data that are not picked up in the monthly figures.

An economist from Capital Economics said figures were overstating growth by a “wide margin” and explained (via the Wall Street Journal):

The continued stability of the official GDP figures will further cement concerns over their credibility. Flaws with how the GDP deflator is calculated, along with political pressure to meet growth targets that have become increasingly at risk, have meant that official growth rates have not slowed nearly as quickly as most third party measures of growth in recent years.

China has long been accused of massaging its official economic numbers, and particularly its GDP figures, in order to hit pre-announced growth targets. But the number of outside observers in the finance industry who are questioning the figures has been growing in recent quarters, as the country’s slowdown increases.

An earlier version of this article incorrectly said that nominal GDP was GDP adjusted for inflation. The opposite is true.