People come and go in Silicon Valley, especially during a rebound attempt, so this isn’t necessarily a crisis. (Yahoo did not immediately respond to a request for comment.)

The company’s revenue after traffic acquisition costs has been flat for years, and adjusted earnings before interest, taxes, depreciation, and amortization continues to droop. When Yahoo reports third-quarter results tomorrow (Oct. 20), analysts project modest declines in both metrics. 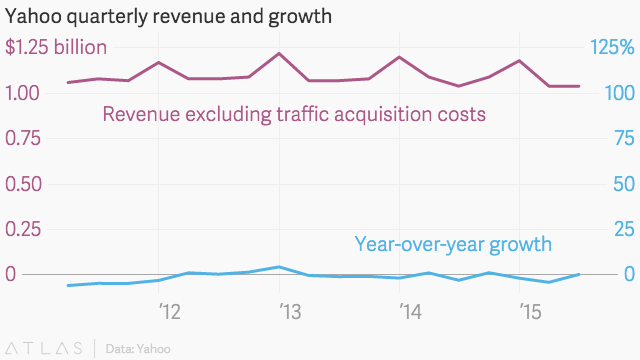 Mayer has focused attention on new efforts like Tumblr, mobile, video, and native advertising. These so-called “Mavens” represented more than one-third of Yahoo’s traffic-driven revenue during the second quarter, up from about one-fourth a year prior. But they have not grown fast enough to make up for the rest of the company.

Most of Yahoo’s value, meanwhile, continues to be its stake in Alibaba—which it is trying to spin out—and Yahoo Japan.