Revenues in the boys category were up 24% during the third quarter, the company announced in a statement. The much-needed jolt came from the avalanche of new Star Wars merchandise tied to the upcoming release of The Force Awakens, as well as products from US box office record-holder Jurassic World.

Net earnings attributable to the company rose nearly 15% to $207.6 million, or $1.64 per diluted share, during the quarter ending on Sept. 27—beating analyst estimates.

The boys segment has always big for Hasbro, which is one of a few toymakers that still breaks out business units by gender. Competitor Mattel merged its boys and girls divisions back in 2003, although the company still considers some brands, such Barbie, to be for girls. And Lego, the world’s biggest toymaker, has positioned its products as gender-neutral for decades. 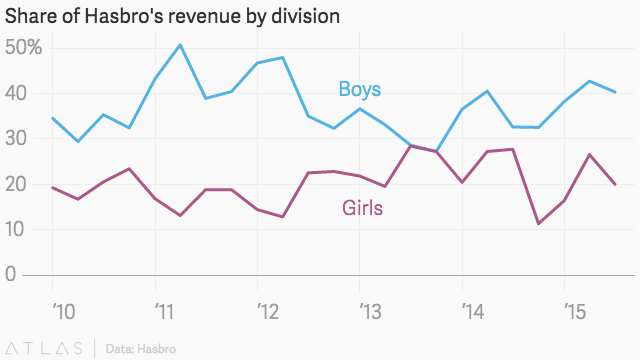 But while toys geared toward boys are flying off the shelves, sales in Hasbro’s “girls” segment are plummeting. Net revenues for girls toys fell 28% during the third quarter, the company said. The biggest declines were driven by brands such as Furby and My Little Pony, and were partially offset by shipments of newer products like Disney’s Descendants. 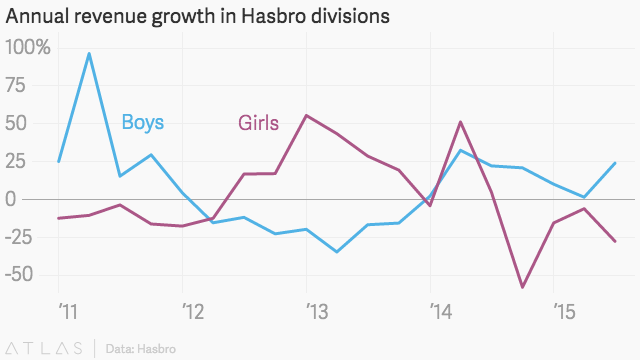 Take Star Wars, for example. Boys are certainly not the only buyers of Star Wars merchandise, even though it’s lumped into the male-oriented category. The Disney-owned property is also popular among girls, many of whom want to play with the same style of toys as the boys, a Hasbro executive acknowledged in an interview with National Public Radio.

It’s part of why the distinction between boys and girls is disappearing from toy aisles; the gender divide is becoming less meaningful. Retailers such as Target are swapping gender-based labels for gender-neutral ones. But even as evidence mounts that gendered toys force stereotypes and establish inequalities among young children, and as some parents move away from gendered choices when shopping for their children, many retailers still group toys into pink and blue aisles.