China’s 6.9% third-quarter GDP growth was way stronger than pretty much anyone expected. But by another measure of output, growth looks less impressive. In nominal terms, the Chinese economy only expanded 6.2% last quarter, its pokiest pace since 1999. 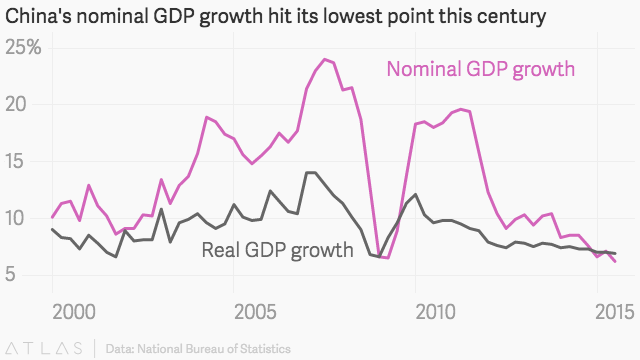 The actual nominal growth rate, which represents growth before adjustment for inflation, is less of a concern than an unnerving inversion: Nominal growth has dipped beneath inflation-adjusted GDP growth, implying a slight but widespread drop in prices.

This could be a temporary blip. But if this trend keeps up, Q3 2015 could mark the beginning of a dangerous slide into the sort of destructive deflationary vortex that has held back Japan’s economy for decades. This is an ominous prospect for China, obviously, but neither is it good for the global economy.

Q3’s falling prices are captured in the “GDP deflator,” a broad measure of inflation that economists use to strip price changes out of nominal GDP. Without this adjustment, you can’t tell how much newly added GDP comes from producing more than last year, and how much simply comes from selling that stuff at higher prices thanks to overall inflation.

This 0.7% fall in the GDP deflator probably won’t shock anyone following the gripping world of Chinese price indexes. To put it simply, they’ve been falling. In particular, it’s been hard to miss the steady slump in prices that producers charge, which has fallen for 43 straight months. 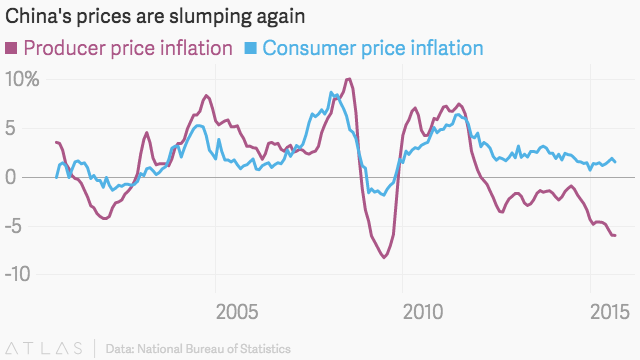 So what’s dragging down producer prices? The roots of this deflation date back to the global financial crisis in 2008, when in Chinese government unleashed a massive stimulus, says Derek Scissors, economist at the American Enterprise Institute. Unlike in the US, this stimulus largely benefited producers, not consumers. Flush with cheap loans, Chinese manufacturers began cranking out way more stuff than anyone in China could possibly consume. As a stimulus-fueled housing construction boom got underway, prices for raw materials—e.g. iron ore, copper, and other commodities—soared. But by late 2011, excessive supply began forcing down prices of these finished goods. Commodity prices soon followed.

And now, the negative GDP deflator—a much broader measure of prices—suggests that producer price deflation is seeping into the wider economy, says Christopher Balding, an economics professor at Peking University.

“A small amount of deflation is fine,” he says. “The danger is [that China is] heading into a period of sustained deflation—and that would be a threat to growth.” When deflation becomes entrenched, he says, it makes everyone to want to save, and not spend—which is not what China needs right now.

Another worry, notes Peking University’s Balding, is that deflation effectively drives up borrowing costs (falling prices make revenue drop, but the value of old debts stays the same, essentially making them more expensive to pay off). That both chills willingness of entrepreneurs to invest and ups financial distress risks among debtors—a big problem given the most debt-saddled sectors are also those suffering from the worst overcapacity.

These are gloomy possibilities for the rest of the world, of course. August’s global stock market freakout hinted at a new sensitivity to even fairly vague bad news from China; think what a rash of bankruptcies might trigger. Of greater concern, though, is that longed-for boom in Chinese consumer spending. The global economy’s been waiting for nearly a decade for this new source of demand to pick up. Sustained deflation could make that wait much longer.