Until now, the general consensus on Apple Music has been that it has failed, is in the midst of failing, or will soon fail. The service, launched this summer (somewhat prematurely according to critics), was expected to stoke some initial interest from iPhone owners but ultimately to remain dwarfed by other music streaming companies.

The number of users paying Apple’s $9.99 monthly service fee is now a third that of Spotify, which leads the industry with 20 million paid subscribers across the globe. Spotify still dominates, but several analysts tell Quartz that Apple’s numbers are surprisingly high. Though Spotify is usually thought to offer a better service for the same price, new music streamers unfamiliar with Spotify might be lured to Apple for its brand, suggests Edison Investment Research analyst Richard Windsor.

It also may come down to platform control: Apple installed Apple Music by default on all iOS devices that upgraded to a new version this summer. It also repeatedly pushed the free trial on its users, many of whom already have credit card information stored in Apple’s system for easy payment collection.

Still, it appears Apple’s growth isn’t taking a bite out of Spotify’s base. The growing streaming music market right now is big enough for many competing services. “Interestingly, it appears that Apple Music has expanded the market for paid subscription music [instead of] taking share from Spotify,” Rich Greenfield, an analyst at BTIG, tells Quartz. 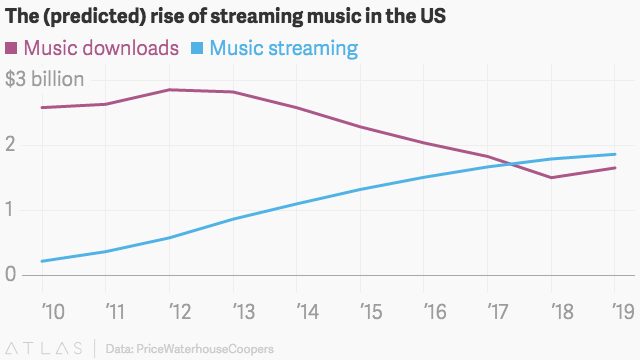 It should be noted that when Apple Music went live in late June, it offered three months of free trial—so it’s possible that many people are being counted as paying users when they simply haven’t remembered to cancel their service yet. Millions have already canceled their service, and it appears the paid subscriber base skews older.

Since October is the first month in which Apple Music has collected automatic payment from those early sign-ups, figures in the next few months, if Apple chooses to share them, ought to be much more telling.