Marriage between people of the same sex has been legal in the UK for 19 months, and the first data are beginning to emerge about how many couples are choosing to wed.

This week, the UK’s Office for National Statistics released statistics about same-sex unions in England and Wales, which will be studied with interest by activists in other places that have recently made gay marriage possible—Ireland legalized same-sex marriage in May; the US made it legal nationwide in June. (Elsewhere in the UK, Scotland legalized same-sex marriage in December last year, but Northern Ireland has not yet allowed it.)

In England and Wales, 7,366 couples have married since the law changed. 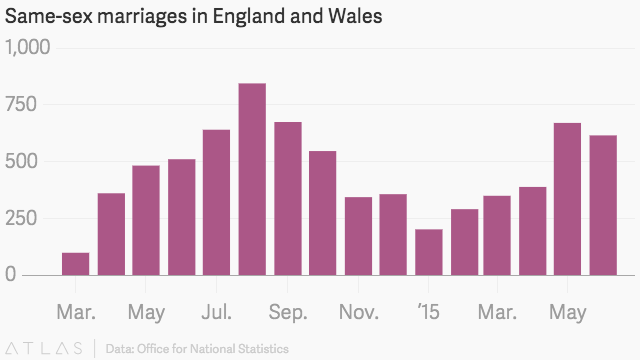 A further 7,732 same-sex couples converted their civil partnerships into marriage. (Civil partnerships between same-sex partners have been possible since 2005.) The summer months were the most popular for weddings, seeing a bigger surge than, for example, the first month of legality, when some couples chose to marry as soon as it was possible after the law changed on March 29, 2014.

It’s also noteworthy that many of the people who married same-sex partners had been married before. Statisticians said that a small amount of these marriages may have been same-sex unions (and subsequent divorces) in other places that allowed same-sex marriage, like the Netherlands which legalized it in 2000.

But most of the people who had been married and divorced before their same-sex union, had probably been married to someone of the opposite sex, since not enough time has passed for people to legally marry, divorce, and remarry, the statistics agency said.