Supporters of the Trans-Pacific Partnership (TPP) are selling it as a way to spur mass exports of manufactured goods such as cars, or commodities like beef.

But the trade deal, which still has to be ratified by the 12 participating countries, including the US, Japan, and Mexico, could also make it easier for a mother in Tokyo to buy a handmade crib from a furniture maker in Vermont.

Aside from the lower tariffs that are part of any run-of-the-mill trade agreement, TPP has a whole chapter on international e-commerce, and another on small- and medium-sized companies. The specific provisions of the pact have not been released yet, but a public summary of its contents shows that the TPP “could be potentially transformative,” Ed Gerwin, a trade expert at the Progressive Policy Institute, tells Quartz.

For example, the treaty promises to speed up the process of getting merchandise across borders by making import rules more easily accessible and transparent. If the agreement is approved, express packages would be expedited and customs officials would be encouraged to adopt time-saving measures such as electronic forms and signatures.

“That stuff is a big deal,” says Gerwin. “Having uniform rules is really important.”

Others are more skeptical about the TPP’s benefits. While it would open world markets for small US e-tailers, it also would expose them to increased competition from their Asian counterparts, which have the upper hand when it comes to shipping, says Ina Steiner, editor at EcommerceBytes. She tells Quartz that it’s generally cheaper and faster to send products from Asian countries to the US, which has a more streamlined and efficient customs system, than the other way around. So American vendors might end up losing global market share instead of gaining it, at least initially, she suggests.

It’s worth noting that cross-border internet purchases have been growing without the need of international e-commerce treaties. In 2014, online shoppers around the world bought $233 billions worth of stuff abroad. This year they are estimated to spend $304 billion. That’s according to a study by Accenture and AliResearch, Alibaba Group’s research arm, which forecast that cross-border e-commerce will more than triple by 2020. 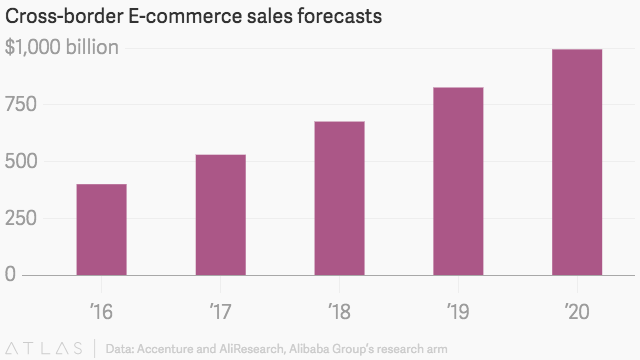 Still, barriers remain. More than half of cross-border shoppers polled by PayPal said they worry about shipping costs, and 45% said they were concerned with customs duties and taxes. Given the current obstacles, sending a $25 bedspread to Asia can cost as much as the product itself for David Salko, owner Bedandbathoutlet.com, a Mamaroneck, New York-based retailer.

“The transportation and shipping costs are very difficult to make it a high-volume proposition,” says Salko, whose business has under $5 million a year in annual sales—less than 5% of which are from outside the US.

One factor in the price that shipping companies charge is the time that goods spend going through a border. UPS, as well as some of its competitors, are big champions of the treaty, which they say would not only make cross-border shipping more efficient for them, but could increase their customer base if it induces more online retailers to export.

“The less bureaucratic you make things, the easier it is going to get products in and out of that market,” Amgad Shehata, UPS’ senior vice president for international public affairs and strategy, tells Quartz.