Get ready for more fun and games in Washington.

Investors are bidding up the cost of insurance on US government bonds, in a sign that markets are bracing for yet another debt-ceiling fight in the nation’s capital. It would be the latest in a series of fiscal showdowns that have hampered the economic recovery from the Great Recession.

True, the market for this type of insurance, known as credit default swaps, is thinly traded. So the recent spike in costs should be taken with something of a grain of salt.

But with the US debt ceiling looming, and Congressional comity still in short supply, it’s likely that brinksmanship will once again rattle the US economy and the confidence of American consumers. The US Treasury Department says Congress has to act before Nov. 3 or the US government will be close to being unable to pay its bills. 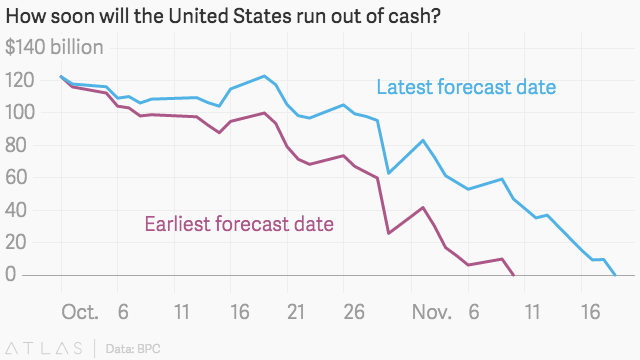 There’s likely a bit of wiggle room there. And few expect the US to actually default on its debts, something that would have catastrophic implications for financial markets around the world.

But if history is any guide, an unsightly debt fight alone could dent US consumer confidence that’s already been somewhat shaken by the recent softness in the US stock market.

As far as the country’s debt load goes, it is high by historic standards at more than 70% of GDP. But things are moving in the right direction, with deficits falling back to pre-crisis levels.

If we’ve learned anything from the European debt situation in recent years, the path to lowering debt-to-GDP ratios depends on promoting growth, rather imposing austerity—raising taxes, cutting spending or both—and damaging the GDP part of the equation.