“Women hold up half the sky,” so goes one of Mao Zedong’s most famous lines. Now women are starting to hold a larger chunk of the world’s wealth, especially in China.

According to the research institute Hurun, eight out of 10 of the world’s richest self-made women come from China. Two-thirds of all self-made women billionaires do, too.

Topping the list is “touchscreen Queen” Zhou Qunfei, the founder of Lens, which makes touchscreens for mobile devices. Raised by her blind father in rural Hunan, Zhou dropped out of school at age 16 and moved to Shenzhen, making watch lenses for $1 a day. After starting her own company with about $3,000 in 1993, her big break came when she won a contract from Motorola to make screens for the Razr. Lens listed on Shenzhen’s ChiNext board in March 2015, causing her net worth to spike to a current value of $7.8 bilion.

The only non-Chinese women on the list are Elizabeth Holmes, founder of blood-testing company Theranos (which is currently embroiled in scandal), and Diane Hendricks, co-founder of the private roofing supply company ABC Supply. They’re worth $3.4 billion and $2.7 billion respectively, according to Hurun.

Hurun’s data shows that China dwarfs the rest of the world when it comes to self-made female billionaires, with 49 of the 73 women that fit the category residing there. The rest live in the US, UK, and just six other countries. 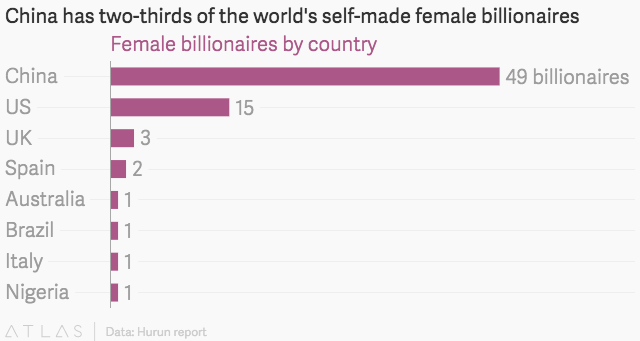 As a result, Chinese female entrepreneurs are collectively worth about three times as much as their US counterparts. 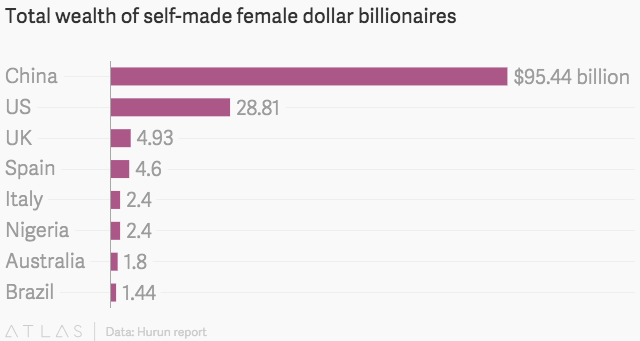 Of China’s 50 wealthiest women overall—those with fortunes both self-made and inherited—Hurun says that 36 earned their fortunes independently.

This comes as individual wealth has skyrocketed in China over the past two decades. But there was an unusually steep rise from 2014 and 2015, when China’s billionaire headcount, including men and inherited wealth, increased about 25%, bringing the total of 596. 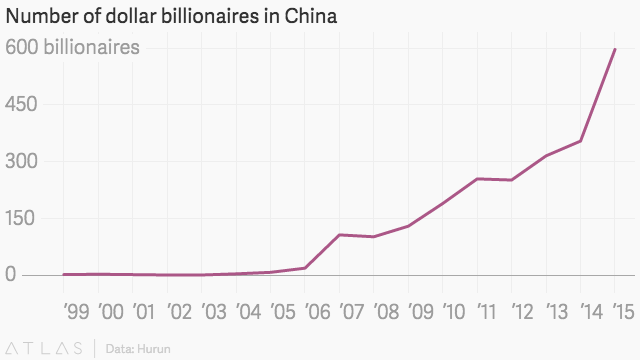 Of course, much of this is paper wealth, not cash. If China’s economy stagnates, billionaire lists like this will get thinner.