Arsenal’s impressive victory over Bayern Munich wasn’t the only thing that made headlines in European soccer last night (Oct. 20).

Some fans of the German team deliberately came into Arsenal’s stadium five minutes after the start of the Champion’s League game against the London club to protest what they said were excessive ticket prices. Once in their seats, Bayern fans unfurled banners that read, “£64 [$98.81] a ticket. But without fans football is not worth a penny.” As the German fans came to their seats, Arsenal fans applauded them.

The issue of high ticket prices is a hot topic of debate in England. There have been demonstrations around the country by fans protesting the hefty prices of tickets, especially for away games. As Quartz has reported, in some cases it costs an English fan about the same to travel to a match in Germany than it does go to a game much closer to home.

A recent study by the BBC found that the average prize of £30.68 for a ticket in the Premier League in the 2015/16 season is a 6.5% year-on-year rise. Arsenal, though, has one of the lowest cheap match-day tickets at £27. Compared to their European counterparts, however, top English soccer teams charge the highest prices. 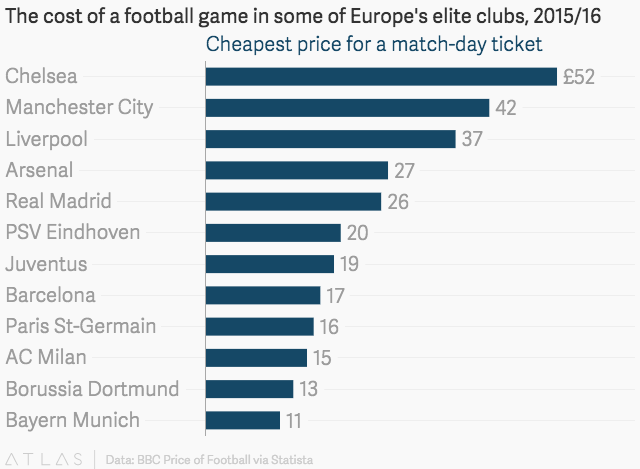 Arsenal has explained that part of the discrepancy between Germany and England has something do with the way the two countries raise revenue for their respective leagues. “We would like to stress that German football receives significant government funding, which is not the case in England,” a spokesman told the BBC.

Meanwhile, Bayern’s manager Pep Guardiola promised that his club might do something about the high price when the clubs meet again next month. ”I will speak with [Arsenal manager Arsene] Wenger for next time to make it cheaper for our fans,” he said. ”We will take care of Arsenal fans in Munich with a good price. They can travel.”