When Marissa Mayer took the reins of Yahoo in 2012—after it had cycled through six CEOs in six years—the Google star represented hope for the ailing search company. But three and a half years later, investors are asking themselves: What happened to that turnaround?

Mayer has been under fire this year given the lagging performance of Yahoo’s stock, which is down 35% year to date. Up until recently, she had been able to coast on the performance of Alibaba—of which Yahoo owns 384 million shares—but the good times came to an end when the Chinese market crashed, dragging Alibaba down with it. This has put a renewed focus on Yahoo’s fundamentals—in particular, it’s ability to cut expenses and grow profits—and investors haven’t been happy with what they’re seeing. 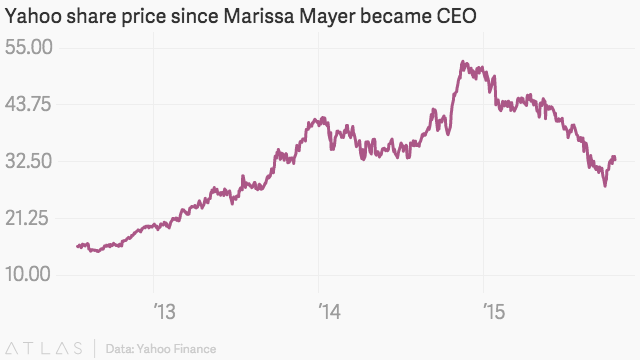 “At the end of the day, the turnaround at Yahoo! hasn’t really materialized,” Barclays’s Paul Vogel wrote in a Oct. 21 research note to investors. ”While the company has had some success in shifting dollars to mobile, the net of all its efforts has been minimal growth in revenue and disappointing operating profit growth.”

Yahoo missed analyst expectations this week when it reported weak third-quarter earnings—profit of 15 cents per share versus analyst estimates of 17 cents—and lowered its revenue guidance for the fourth quarter, typically the biggest of the year given the holiday season.

“It’s hard to find a bottom here,” RBC Capital Markets analyst Mark Mahaney wrote in an investor note. “Until we gain confidence that fundamentals and estimates have based out, it’s hard to recommend these shares.”

But Mayer’s most scathing criticism has come from investor Eric Jackson, who penned an op-ed on TheStreet called “Why Yahoo! CEO Marissa Mayer Must Go.” Once an ardent Mayer supporter, Jackson has become one of her most vocal detractors. He went through a laundry list of her shortcomings as CEO, including:

Pouring salt on her wounds, Ross Levinsohn—who was also up for the Yahoo CEO job and served the role on an interim basis before Mayer came in—said the turnaround is “hardly impossible,” given Yahoo’s more than $4 billion in annual revenue, $6 billion in cash, and 1 billion users. What the company needs, he said, is clarity and strategy. That’s what Mayer has promised investors in 2016—once she can put the Alibaba spinoff behind her.

Yahoo did not respond to a request for comment.