It seems that the discipline that new Google—soon to be Alphabet—Chief Financial Officer Ruth Porat was meant to bring to the company did not extend to its hiring practices last quarter.

Google hired over 2,800 employees last quarter, the company reported as part of its third-quarter earnings today (Oct. 22). That’s the highest number in four quarters, and the second-highest ever. It bucks a trend of three consecutive quarters of slowing employee growth. 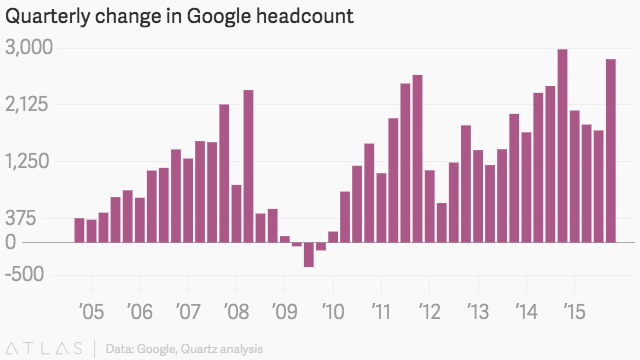 Through September, Google had nearly 60,000 employees. 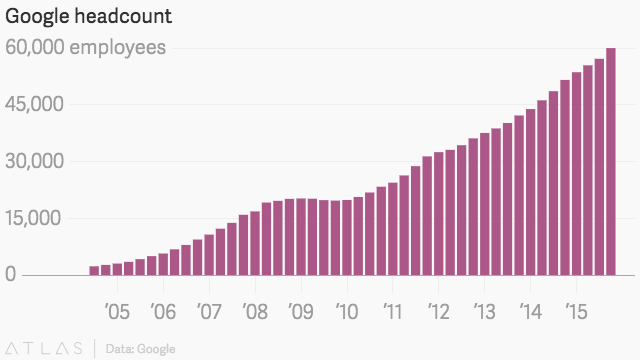 On the earnings call, Porat said the majority of the new hires were recent college grads, mainly engineers and product managers. (Google reportedly warned analysts last month that expenses might come in a bit higher for that reason.)

While the company’s hiring has been trending downward and many of the hires were due to the fresh tranche of grads available, it seems that the company is still looking to expand as it reorganizes into Alphabet. ”With six products now having more than 1 billion users globally, we’re excited about the opportunities ahead of Google, and across Alphabet,” Porat said in a release. It’ll need a lot more engineers if its products keep growing their userbases.

Google’s revenue for the quarter was up 13% on the year, raking in over $18 billion. Google-Alphabet’s stock was up over $70 (or 10%) on the news of the company’s earnings in after-hours trading at the time of publishing.