Apple is set to report its fiscal fourth-quarter financial results today after the US market close. (Join us at 4:30pm Eastern for live charts and analysis.)

Last quarter was the launch quarter for the company’s new iPhone 6S and 6S Plus, so one key figure will be the number of iPhones shipped during the period. Analysts expect about 48 million, which would represent 22% year-over-year growth.

But the most important number Apple will reveal is its forecast for the current, first fiscal quarter. This is an important time for Apple: The December quarter, fueled by holiday shopping, represented almost 40% of the company’s revenue in 2014.

Strong sales guidance would suggest confidence in iPhone supply and demand, and more broadly around consumer spending. The iPhone represented almost 70% of Apple’s revenue last December quarter, and isn’t expected to grow much this time around.

Analysts are expecting Apple to guide December quarter revenue in a range somewhere between $74 billion and $77 billion, which would be modest growth over last year’s record $74.6 billion. So any strength could drive Apple stock higher.

But also remember that Apple likes to provide a forecast it can beat: Of the last 10 quarters, Apple has beat the high end of its revenue guidance seven times, by an average of $2.5 billion per quarter. As a result, the current consensus is for Apple to actually generate $77 billion in sales this quarter, above the expected forecast. 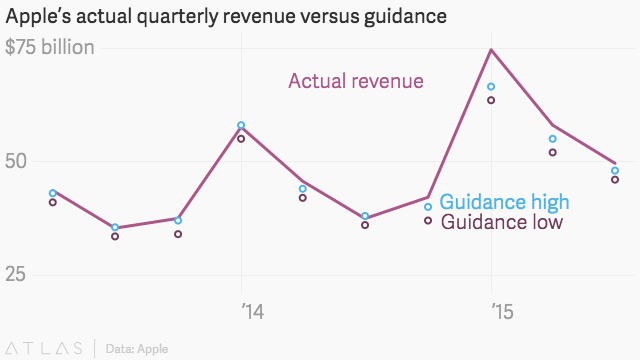 What else? We’re curious to see how the iPad fares; expectations are pretty low, around 10 million. And how about the Mac? This time last year, it set a new all-time sales record.