Following the first Democratic presidential debate on Oct. 13, YouGov published a new poll which surveyed Americans of three political persuasions (Democratic, Republican, and independent) on whether they favored capitalism over socialism, or vice versa. 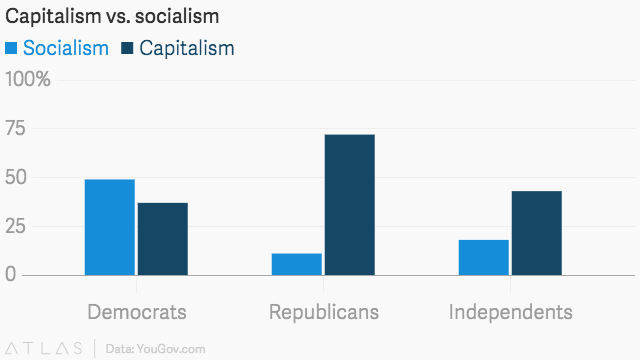 Following its publication, some commentators took to Twitter to herald what appeared to be an unprecedented political reality: in 2015, more Democratic voters favor socialism over capitalism.

It’s a talking point that, if true, will undoubtedly be put to use to bolster Vermont senator Bernie Sanders’s bid for the Democratic nomination; or undermine relatively centrist former secretary of state Hillary Clinton, who has weathered significant criticism for her ties to Wall Street.

What this line of thinking overlooks, however, are two facts:

First, socialism and capitalism are not mutually exclusive concepts. Senator Sanders will tell you as much. When he advocates for Nordic-style social democracy, he isn’t talking about capital-S “Socialism” of the kind that inspired so much McCarthyist paranoia in mid-century America. He’s talking about European economies that essentially operate on the free market (under reasonable government oversight), serving a populace than enjoys robust social-welfare programming.

Americans are quick to forget that Sanders’s much-lauded Denmark is, in fact, a capitalist economy. Danske Bank, the country’s largest financial institution, ranks among the world’s major retail banks. It generated profits of over 12.9 billion Kroner (US $1.8 billion) in 2014. Sweden is a well-known entertainment-industry powerhouse. Norway is a giant of the international energy economy. All three countries, along with fellow Northern European social democracies like Finland and Germany, consistently rank among the best countries, worldwide, in which to start and operate a business.

The “Nordic model” of governance is, by definition, a melding of free-market economics with a comprehensive welfare state. At its core, it champions individualism and upward mobility. It facilitates independent business ownership, prioritizes private property, and propels free trade. At the same time, it allows for collective-bargaining rights at the national level and entails frameworks for free, high-quality, universal education and health care. It is a system that attempts to harness the positive aspects of both socialist and capitalist political economy for the welfare of the citizenry.

Second, this system is already in place, to a lesser degree, in the United States. Tax-funded police and fire departments, libraries, public schools, parks—these are all, by definition, collectivist endeavors. Lowercase-s “socialism” has had a presence in America since the Revolutionary era, when the newly formed US government offered free grants of land and pensions to veterans and/or their widowed wives.

Even Republican presidents have enacted socialist projects. President Dwight D. Eisenhower (in office 1953-61) continued the post-World War II GI bill into peacetime, which is often attributed for creating the much-talked-about mid-century American middle class, the men and women who drove the economy into hyperdrive. He also created the Interstate highway system, a perpetuation of the New Deal, and enforced Brown v. Board of Education, a landmark case in the fight for equal access to public education for African Americans.

The presidency of Richard Nixon (in office from 1969-74) gave us the Environmental Protection Agency (EPA) as well as the Occupational Safety and Health Administration, which regulated industry to ensure decent conditions for American workers. Herbert Stein, chief economic adviser during the administrations of both Nixon and Gerald Ford, once said, “Probably more new regulation was imposed on the economy during the Nixon administration than in any other presidency since the New Deal.”

Additionally, Nixon beefed up Social Security benefits, introduced a minimum tax on the wealthiest Americans, and guaranteed minimum income for the poor.

John F. Kennedy, Lyndon B. Johnson, Harry Truman—they all demonstrated socialist politics in some form or another (and were often accused of big, red Communism as a result).

In short, socialism vs. capitalism is, and alway has been, a false dichotomy. It’s a specter raised by anti-regulation, libertarian types to drum up public antipathy for government oversight. It’s language that cleverly stokes the embers of Red Scare. But, as history indicates, social welfare and free-market economics have operated side-by-side in America for centuries. And that isn’t likely to change.

Has such a combination been implemented flawlessly? No. Can America be even more like Denmark? Sure. But “bringing socialism to the White House” alone is not reason enough to vote for or against a liberal candidate. It’s been there for years.